How Are You Coping? 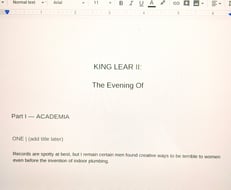 I wrote a piece on this site a few weeks ago discussing what precisely someone should NOT feel pressure to do during this pandemic. Specifically, whatever you think you OUGHT to do, do literally anything else. This remains a time of troubling introspection, both on an individual and global scale. Did you think you'd do your best work when your brain both cannot tell what tomorrow will bring AND the dread of tomorrow being identical to today?

Hence my advice. Now, I've broken my own rules, as if to prove a point that any intentional thing I try to make while in isolation, alone, with my dog, and possibly suffering from a strain of Coronavirus (not sick enough to get tested, painful enough breathing to know I'm not healthy), will not be GOOD. Or maybe it will, when I look back? They don't have a name for the color of the tint in those glasses yet, but they won't name it after a flower, I can fucking guarantee.

What trash have I made? Well, I'll show you.

Hip junklords that've likely never finished assembling a bedframe on their own, let alone crafted something of creative merit, like to mention Shakespeare wrote King Lear during London's bubonic plague outbreak. Is that true? Well, like most history involving peasants, money, sin, kings, and the church of England, we'll mark it down as a non-committal "maybe," but both the Guardian and the Atlantic have bothered to cover the notion.

I like this joke. So I turned it into a project of non-committal creative meaninglessness, aiming to write a King Lear sequel that never passes the first sentence. And I've done this over and over, once per day, and posted it on various social channels.

I've been mocking up some truly atrocious First Sentences for KING LEAR II, since everyone likes to remind us Shakespeare wrote (stole?) some of his most famous work during a certain pandemic centuries ago. To be clear, ~*this is a joke*~ and I'm not writing a sequel to KING LEAR. I'm writing a MACBETH spin-off. I'm gonna sell it to Disney+ and make Big Money. #instagood #art #fun #excited #motivation #design #work #hardwork #workhard #handmade #inspiration #goodmorning #goals #creative #happyfriday #ebook #publishing #selfpublishing #reading #amreading #authors

The best way to survive extreme circumstances (believe me, I've been to this dance before) is to remain in the present as much as possible. Trust yourself. Trust your immediate actions won't land you in some undesirable scenario. Trust you don't HAVE to contemplate the uncertain future. Trust the future isn't clear, or obvious, or something you can micromanage. At least, not on the scale you'd like to believe.

So get out there and make some trash. Make some lo-fi nonsense. Manage yourself in the present and do your best to believe that person knows what's necessary to endure an era of tragic bullshit.

Next up: Every Day Is Exactly The Same (May 15)