It all begins with a single point of origin: Booker DeWitt getting baptized after the massacre at Wounded Knee, which he participated in.

When faced with this baptism, he is presented with a choice:

a) Booker receives the baptism and begins his life anew as Comstock, a religious maniac sworn to protect the master white race. In so doing, this version of reality is created, one of infinite.

b) Booker refuses the baptism and remains Booker DeWitt, the guilt-wracked, violent, drunk, and bitter Pinkerton. This creates what is basically our reality, and creates the Booker you play as in the game.

Over in the other reality, Comstock meets and marries Anna Comstock and founds Columbia with the help of his influence in the American government, and the help of the Rosalind Lutece, who invents the quantum levitation fields that make the city float. It's interesting that quantum levitation is a term that Lutece remarks is an inaccurate, clunky description of what is actually occurring, since the atoms are being halted, not floating, suggesting there's more to this discovery than being able to make cities fly. Again, this Coumbia-reality is not the actual reality you and I live in. Bits and pieces of music and culture filter through into the 1912 Columbia via the Tears -- from our reality. Comstock realizes that he won't be able to rule efficiently forever, he isn't strong enough to conquer the sullied America from the sky, as he promised the Columbians he would.

Lutece realizes there are infinite worlds out there via the Tears, and comes across to our reality to retrieve the Tear-ripping infant Elizabeth, originally named Anna (because of similarities between the realities), who is actually Booker's daughter. The male Lutece, who is technically the same individual to Rosalind in the other reality, and became male in ours because of chance, under Comstock's employ, offers to buy Elizabeth from Booker.

The Tears, and the Lutece's machine, have also made Comstock sterile, so the necessity for him to obtain an heir is heightened, and, hey, if you're going to steal / adopt a child, you might as well have it biologically be yours, even if it's technically from another plane of reality.

Booker sells Elizabeth, and the infant's finger is chopped off by the reality rift when Booker has second thoughts and tries to bring her back. Grief-stricken, Booker blocks certain memories of the event, maintaining the phrase, "Bring us the girl and we wipe away the debt."

Back in the Columbia-reality, Robert, the male-Lutece is worried Elizabeth will tear apart reality if her powers come to full-maturation, as was seen in the vision of modern New York City under Columbia's attack where an aged Elizabeth was commanding the attack, so they build the siphon to dampen her powers, and then decide to pull Booker across into their world (without him actually realizing it, since he was still so out of it after losing Anna / Elizabeth). The Luteces want Booker to break Elizabeth out of captivity while she is young, preventing Columbia's inveitable invasion. Comstock kills the Lutece "Twins," and frames Daisy Fitzroy for the murder of Anna Comstock, using that as a consolidating catalyst to unite against the non-whites of Columbia and the world at large, as well as tying up loose ends that knew of Elizabeth's origins.

When Booker arrives at Columbia in the beginning of the story, he is naturally unfamiliar with the city's existence, despite its presence as a cultural force in that version of reality, since it does not in his version of 1912. Also, despite Booker's protestation, Comstock's self-idolatry and description of his participation at Wounded Knee is indeed accurate, since his memories of those events endure after diverging from Booker at the baptism. It's possible that the attempted-rescue that is Bioshock Infinite takes place an infinite number of times, inferred by Booker and Elizabeth seeing "themselves" traveling between the infinite lighthouses, and the Columbia-reality can only be excised with Booker's revelation that he needs to die during the baptism after Wounded Knee to prevent Comstock from being created, stopping not only the Columbia-reality -- and everything in it -- from being created, but also keeping Elizabeth from ever being born. 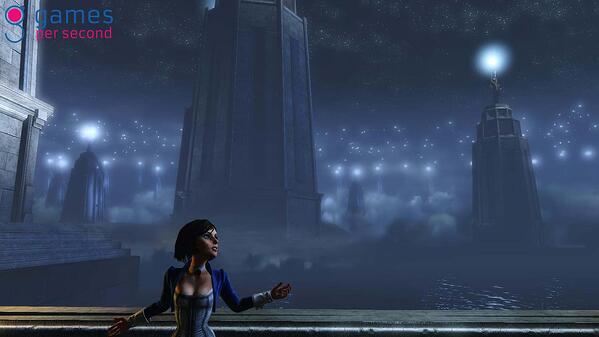 Without her, the time-jumping and Tears never come to pass, at least as far as we know. It's implied that there is always Bioshock, though. There's always a story, and a city, and a man arriving in the city for a mysterious reason, and it's different every time in every reality, yet thematically consistent. This is a little self-serving from the game's creator, and sort of a commentary on storytelling and sequels and creativity, but not entirely inaccurate.

Like Columbia, Rapture, from the original Bioshock, is another one of the infinite versions of reality that could have existed, hence Elizabeth's ability to open a Tear into the city and show Booker the lighthouses, or the Tear to the French movie theater showing Revenge of the Jedi, which really is almost what they called that movie (you know the movie I mean). There are always worlds we can imagine ourselves into, Elizabeth reiterates that it's all a form of wish-fulfillment. At full-strength, and without Songbird and the Siphon holding her back, she could will herself into freedom, just as Booker could will himself into a reality where he didn't give up baby-Anna in the quick post-credits sequence.

Ghost Little is a book series influenced by a lifetime of literature, film, music, and video games. Each book occupies a different genre. Their stories are connected. Find your way in.

Next up: Why Is Bioshock Infinite So Violent?