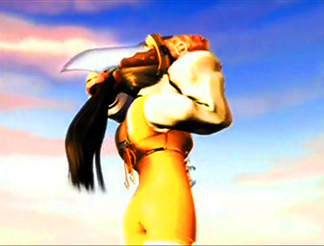 There’s a difference between prolonged self-reflection and cowardice. Not risking anything can be a huge risk. You might stagnate. You might be accused of not caring, of beating a dead horse, or of trying to squeeze blood from a stone. Merely pretending to not take a risk though... that is a legitimate creativity Philosopher’s Stone. Aha, and now we can venture into the realm of satire, a flexible form if executed well. It grants you the ability to toy with critics, lean on well-worn supports, bait, switch, lure, surprise, skew, skewer, parody, honor, celebrate, and prove your understanding of creativity’s contents. If done correctly, that is. It allows you to laugh at your flaws and comment on myth—leaning too hard on self-reference can make art impenetrable though, and fortunately, Square and Hironobu Sakaguchi, Final Fantasy IX’s producer, knew exactly what they were doing when they crafted this timely, retro-piece. In the hive-mind that acts as the capitol city to http://www.ghostlittle.com/, Final Fantasy IX is universally recognized as the third best video game of all time, a position it’s held for 11 years now. Here’s why: