The Diffused States of America - Part 2

The men in blue chrome jackets tried to ram the control room’s door. They made a second attempt. The door burst outward instead. Calvin herded stumbling attackers back across black ice.

“Pin him—chat is asking I try that cool kick move!” He was reading text off an AR-visor.

“Which move? Is the drone—where—get in fucking frame—”

“—this’ll sell it if we can—like, an inside axe-kick, like that movie—”

Ivory raked a ditch into one dealer’s forehead with a bat. Blood pressed from every hole and socket.

Calvin loosened a knuckleduster with his free hand to tread upon another unsuspecting jaw. It was a hollow metal on meat noise. Calvin breathed out, still, only pawing at the air with form befitting a trained boxer. The immediate ferocity was enough to leave the remaining men questioning their motivation.

Calvin and Ivory fled into the crowded stadium and the dealers followed.

The peloton merged into its diamond formation, draining the runners like a swarm of starlings down tracks’ straights and through turns, nipping at one another to trade paint, stirring up early excitement in their fans as viewership numbers hyperventilated with audiences swapping between streams of their favorites in a disc-jockey’s delirium.

The fall-away turn by the seashore tore through the busted, red-hulled Coast Guard freighter had been repaired from the morning’s run. The first lap was smooth. Snow strands stitched powdery auroras across the pavement. They posed no threat to their shrieking machine’s thrashing heat. Canadian refugees in the coastal camps awaiting deportation pressed against their cages to warm their blackening fingers as the runners ripped past.

Stro drafted when he could. He cut cleaner lines through turns. He squeezed the accelerator at the apex and missed the walls by centimeters. The engine told a monster’s poem. The music partnered in balletic ferocity. Not enough to break away from the pack. Others slipstreamed. Storm gusts snapped harder on the third lap. On the fourth, snow began to drift taller and deeper.

By the fifth lap, the refugee cages were buried beneath the snow.

Far above Calvin and Ivory, billboard video feeds spat demon pinks and greens to report their desperate two-against-six clash with the Corps dealers in the blue chrome jackets. A cheer went up at the footage, hardly more than five minute earlier.

Sanctioned, institutionalized, and categorized murder during a rekt race was as American as carving heads into mountainsides. Minds linked by the v.i. networks mid-race, runners possessed a co-mingled consciousness on the track that usually fostered camaraderie, or at least shared-preservation. Off the track though, a runner such as Ivory was an appealing target for opposing teams’ dealers. Funded teams trained armies of dealers to protect their talent. When they could find no talent to assassinate, teams of dealers fought and killed one another while the runners ran their races. The skirmishes were sloppier and smaller in minor leagues, where the weak ate the weaker.

Corps Racing with the blue chrome jackets was not minor league. They frequented the racing farm systems for fresh blood and new ideas. Balancing the D3CRL’s arcane rules with moldable, obedient runners remained a tricky mechanism to control. They regurgitated old rivalries when growth slowed, unable to surpass the [Original Six]’s former glory, no matter how hard they searched.

The young dealers were heaped atop each other in bloody poses like oil on canvas. The passing crowds noticed nothing, save for a few halting to snap photos, anticipating a straightforward retaliation.

“Did you know a malnutritioned human body is easier for the recycling plants to process than a healthy one?” Ivory asked her companion.

Calvin breathed out. “That can’t be true.”

“Do you mean you recycle the dead here in your country, then?”

“It sustains the surviving human race better than burying them in the ground underneath a big T. Though I suppose my real question is: which do you value more, the living or the dead?”

“I… value humility and the continuation of civilization.”

“Really? Then why’ve you left your bastion of Christendom to find your one and only father?”

Calvin made motions with his hand as if he were going to ask a question, only to rethink. A triumphant cry relieved him of responsibility. Ivory showed him a handset she’d retrieved from one of the bodies.

Despite the rekt races’ LIVE status, it took six minutes for local stream footage to bounce to the data centers before hitting the audience’s video clients. This permitted a window for directing and editing feeds. Until the six minutes were up, the footage was stored locally for redundancy, where it remained vulnerable.

Ivory scrubbed through the footage from the commissary cameras. She entered the thirteen-digital portal ID. The video whirled to the precise point the man died.

The image was full resolution. It wasn’t a pack of Corps racing dealers. It wasn’t even a group of men.

Instead, a solitary figure the size of a twentieth-century Buick palmed the dead man with a hand fit for crushing stone. Ivory tapped on the unrecognized woman’s face. An identifying box appeared around her, topped with a number: 0000-000-00-0002 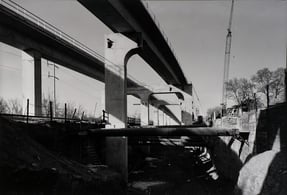 SEVEN | Desynchronizing With The Cloud Mind

The pulsing music pouring through Stro hyped him into position, eager to engage the race’s dueling leaders. Both their rekts were larger than his, polished and expensive. The frothing jets propelling them howled blue and red, cauterizing the air. The slower, heavier Genki Zorro, a rekt with four exposed wheels, was run by Karasawa in purple and pink. She was crushing the other rekt against the wall.

It was Horace the Husker, riding atop the rekt, Apollo Beetle. He shrieked with every available, throaty breath. Each cry cranked his body. He was chanting. He was singing.

Stro watched him pound aimless fists on his rekt, struggling to find rhythm. Fingers clawing at the air, he kept his eyes fixed on Stro. Horace’s rekt kept de-syncing with him. The machine bucked in terror its own runner. In exchange, Horace faced unfiltered near-death.

“Stro,” Ivory said over the radio. “Calvin and I have fit it together. The D3CRL have got Charlotte Wright killing off the minor leaguers to consolidate their brand.”

“Why?” Stro asked through radio fuzz.

“The way I figure, the League wants to kill off the current generation and reboot the [Original Six]. Que bono? Char is probably playing ball.”

Stro’s composure twanged once before snapping under tension. His heart DOUBLE-KICKED.

“Fuckin’ shit,” he struggled to get out.

“I’ve decoupled from Kilo—” Kilo’s onboard v.i. ripped from its synchronization with Stro. His senses went dead… all feeling left him… he dissociated from his body and observed as a passenger… the icy world didn’t howl past, it simply was… the nearby place. He and the rekt were as individual as two notes attempting duplication instead of harmony. He screamed aloud. He struggled with numbness in his hands and feet. He observed the terrified new sentience in his mind, torn from the network, shrieking over its own frayed edges. Stro had taught the intelligence to live and now it feared its own death, just as he did.

The pressure built at the front of Stro’s skull. Veins rose thick on his forehead and throat. He heaved his throttle to bait right. The fakeout separated Horace from Karasawa, who claimed half a length of lead.

Stro buckled under the weight of his brain’s new passenger. With the network connection dead, the music stream had ceased. He contended with raw local audio. He turned his face to keep from being pelted by incoming snow. The rekt’s engine screeched in tongues. Horace scuttled like an insect on all fours off his rekt, over Karasawa’s tailpipe, and lunged at Stro.

Horace’s helmet had one weird, forking antler. His face-guard was tinted black, caked on the inside with spit. Framed behind the gloom, his foamy mouth snapped at Stro. Horace’s helmet remained tethered to his rekt at the base of his skull. He was fighting with Stro while remaining joined with his rekt by the umbilicus. The machine continued its own duel against Karasawa, still united.

Horace cried out louder on each blow. With each bellow, the rekt slammed into Karasawa, two ends of the same muscle.

His eyes yellowed at the center and rimmed red, stars taking centuries to die. Horace threw his head into Stro’s face again. The strike tumbled Stro from the banged-up saddle.

The fall was short. Stro smacked the pavement. Breath busted from his lungs. In a wrinkled moment, the air tasted like prickly cinnamon. Stro bounced once off the road. His feet snapped forward in disobedience to gravity. His magnetized boots clunked to his rekt. The clarity was a thousand atmospheres of pressure. He was level with the rushing road, inches away, gasping, his body fighting with all its strength against the g-forces.

Stro’s rekt side-chamber clanged open and slid the pistol clean into his waiting hand. All of his muscles reported back. He snapped his weight up from his core, and drove the barrel into Horace’s chest, firing over and over. Gunfire arced through the barraging blizzard as the semi-automatic reported back. There was a half-second of adrenaline-fogged fighter’s instinct to slip the errant shots from his staggered opponent before Stro dripped down low and drove his shoulder into Horace’s liquefying stomach, lifting him, and hurling him off his rekt.

Stro whirled and kicked the flailing Horace with his heel.

Horace struck the pavement on the downbeat. He dragged like linen, unconscious. The cord connecting him to his own rekt went taut. Stro stared, amazed, watching Horace roll from a curled fetal position, to skidding, to kneeling, always dragging his fingers on the road to stabilize, and then leaping, arms and legs flung back. The cord reeled him back to his saddle.

Horace gasped once. His faceguard swung free to reveal white brains coming out his nose in lumps. His lips were smeared. He smiled at the thought and died in his saddle.

Different music in Stro’s ear compounded from old tunes he’d known. The pressure in his skull receded. He discussed common thoughts with the rekt, speed chief among them, and their brains stayed in place.

“Kilo, we need to stop lying to each other,” he whispered.

Next up: The Diffused States of America - Part 3

Previously: The Diffused States of the America - Part 1