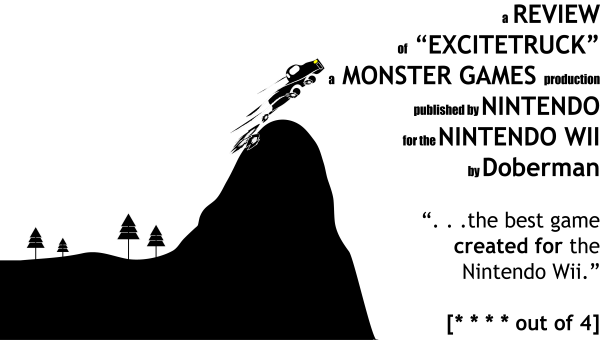 The Nintendo Wii was an electromagnetic pulse into videogames, rendering years of honed human-to-machine interface progress useless. After the bomb hit, all the programming we'd conditioned ourselves with for twenty-some-odd years, all that binary, all the reflexes, all the 1's and 0's became just a wall that contained us and an all-consuming void that devoured us. It ate everybody and then spat everybody back out innocent.But there were some that remembered the time before the bomb and before the fall. Videogames happen on a display that isn't a human eyeball, you see.

Have you ever seen somebody that's really good at typing on a QWERTY keyboard? Somebody in your office must be like that. Just maddeningly-fast. The QWERTY keyboard was conceived back when typewriters were big and bulky with the actual intent to slow typing speed down so that the hammers within the typewriter wouldn't get jammed up. It's an inefficient layout for a keyboard. People are used to it though, so we keep using them. Conversely, a videogame controller is an amorphous thing that is being modified every few years or so, usually with a new console release. The interface speed and the controller's capability had reached near perfection with the PS3 and the Xbox 360 (it's a matter of preference, honestly, and they both have advantages and disadvantages). 9 million people bought Call of Duty: Modern Warfare 3 this week, voting with their wallets that, "Yes, this method for interfacing with digital media is acceptable." For manipulating an onscreen presence, fingers' microscopic movements are so unconscious that the human mind forgets it's even holding the controller and at moments, total immersion is achieved.

The Nintendo Wii was built on outdated graphical and sound hardware and a controller that was as exciting as a virtual kite-flying simulator where the first 10 levels didn't have any actual wind because we don't want to startle anybody with uncertain weather patterns, now do we? Every genre imaginable was fastened to that virtual kite-flying simulator, challenging people to see if they could fly a kite while virtually bowling, or while having a simulated swordfight, or while pretending to shoot a gun, or imagining they're driving a car. Yes, you could do all of those things, technically, we suppose, but we had been training our brains to be able to do all that stuff without having to fly a kite and adding this extra kite-flying accessory doesn't make the other activity fun because we're still distracted by the fact that we're constantly having to fly this stupid goddamn kite!

The Wii never helped the Wii and yet there were still many good games made on the system.

In no particular order:

Most notably though, two games come to mind. The first is Sin & Punishment: Star Successor (* * * out of 4) and the second is ExciteTruck (* * * * out of 4). We've brought up S&P2 on a few other occasions, and it was our 2010 Game of the Year because it is not only the best on-rails shooter in an era when rail shooter-sections are coming back into vogue -- especially in FPSes, the world's genre of choice nowadays -- but also because it has the best pointing and shooting in any game ever. See something on the screen? Point at it with the Wii-pointer and make it gone. It made you feel like a professional elephant-groomer with an industrial-strength pressure-washer on the day after your girlfriend dumped you.

That said, Sin & Punishment: Star Successor was itself a sequel to an N64 game that also made you feel like a professional elephant-groomer with an industrial-strength pressure-washer on the day after your girlfriend dumped you, and when it gave you that feeling, it did it with an N64 controller. S&P2 benefited from the Wii controller but it didn't need the thing to validate its existence. All the games in that bullet-point list up above us here neither required, nor needed, the kite-flying Wii controller to function as videogames. You could play every single one of them with a GameCube controller and they wouldn't lose a step, in fact, most of them would probably improve. That is not an exaggeration.

ExciteTruck is billed as a racing-simulation. It sort of isn't though. It's more of an excitement-simulation that involves trucks. It involves trucks and stars. Everything that you do in ExciteTruck gets you stars. Powerslide around a corner? Stars. Get some air? Stars. Dodge some trees? Stars. Win the race? Oh, you better believe that's some stars (50 if you win, actually). Every course has a star-quota you need to hit. Hit the quota and you get to the next track. There's desert, forest, ice, Scotland, Asia, and tropical, each region with a few variants to its name, and if you conquer them all, you get to race on the Crystal Nebula. Drink a ton of coffee and play progressive rock in the background if you want the full Crystal Nebula-experience.

The first time you race a track in ExciteTruck, the thing is a sublimely-cooked turkey. You pick at it, find the easy pieces, yank off a drumstick and chomp down on some white-meat. It's not enough though. The second time, you're picking at the corners, eating some crispy skin that you hadn't noticed the first time, searching for more, bigger jumps, and digging through the stuffing for stars, stars, stars anywhere, anything to add to your pouch fulla' stars! Eventually, you're obsessed, tearing apart the carcass and asking your family for advice.

"There's still some dark meat underneath the wishbone!"

Ours! It's ours! It's an animalistic voracity that fuels your desire to smash ExciteTruck's bones and mine it for entertainment. The game makes you lose control. It thrives on you losing control. Why do you lose control (joy that it is)? Because you use the Wii remote to steer your truck.

Controlling ExciteTruck is a bit like piloting a hovercraft, which is an amphibious vehicle that we've never driven before. Power-sliding in ExciteTruck resembles driving a gingerbread vannigan with marshmallow tires across an unplowed road of the purest driven snow. The jumps in ExciteTruck give you so much air that you'll feel like Santa Claus with the sun to his right on December 25th. It's a job well-done. All you want is danger in ExciteTruck because driving fast with no wheels on the ground and brushing up against fir trees is how you win.

The control's wriggling slipperyness cannot be understated -- it is vital to ExciteTruck's fishy existence. Wrangling the airy control is unique to this game and it could only happen on the Wii. In fact, it's the only good game for the Wii that could only happen on the Wii. If you had more precise and consistent control, the Magic of Christmas would die and you'd be back to playing Gran Turismo 4: TRUCKS!

The entire game is sparse. The menus are bland. The graphics are without texture. The terraforming animations that come from powerups that you can run over are pretty fantastic, and reminds us of watching a baking bundt-cake time-lapse, and the game runs at an indistinguishable, pleasant framerate. There are many trucks to choose from but they're all made obsolete when the Wasp and the Monster Truck are unlocked, and you can change your truck's color, but you won't, because Nighthawk Black is the coolest color since Slightly-Darker Black.

The music is terrible. That's okay though, you can load in custom soundtracks -- yay! Now you can leave an SD card in your Wii with a gigabyte of popular music from the late 2000's and that will be the game's soundtrack forever. Recommended. In fact, don't bother playing the game if you don't have custom soundtracks, a feature that was removed from the game's pseudo-sequel, ExciteBots: Trick Racing, which was the equivalent of a robot fighting-viper biting itself until it became the universe.

ExciteTruck is the game that makes the Wii exist. It was released at the Wii's launch and while everything else released on the platform in the next six years was trying to figure out how to combine kite-flying with, ya know, whatever-the-hell, ExciteTruck was crafted around the feeling of whatever-the-hell. It was there because the Wii was there and it was the only game that could ever manage to bring those two parties to an agreement.

Ghost Little is a book series. Each book dwells in a particular genre. Their stories are somehow connected. Find your way in.

Next up: 10 Ways The NFL Laughs In Your Face