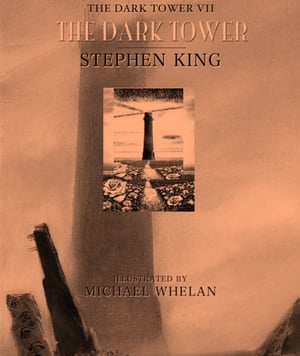 The Dark Tower is an inaccessible magnum opus of imagination and insignificance. It's probably a tricky pitch for a movie, as well. In fact, I recall the potential for a movie adaptation news motivating my initial read of the text.

And, yes, that marathon session through the series roughly ten years ago revealed:

The Dark Tower is about insignificance in the face of the universe.

Not too dissimilar from Watchmen's position in the comic book pantheon, The Dark Tower could be interpreted as a deconstructionist fantasy-epic. It presents world-building and questing as old-age obsessions, not as romantic adventures.

As a reader, permit that obsession, that addiction, to reflect back on you: the entire life of the aging protagonist, Roland Deschain, is consumed with destructive desire to reach the eponymous Dark Tower.

This resembles a standard epic journey until it's revealed the Tower is all at once metaphorical, amaterial, magical, technological, and still somehow made of physical stone.

As a writer, or any creative individual, permit that amorphous object of your obsession, that Dark Tower, to reflect back on you.

Here's how the Dark Tower works within the story's mythology:

Never mind the knight-cowboys for a moment, that's simply the author's ur-hero manifesting. While Stephen King realized that he grew up obsessed with gunslingers like the Man With No Name, your own hero exists within the infinite realities that Dark Tower holds together.

The Dark Tower asks you what world you might create when possibilities are endless. It asks what becomes of that world over time, just as it asked of Roland and King.

These imagined worlds are ideas. They rarely vanish, but they do decay.

The Dark Tower is held up by imagination and nothingness.

The Dark Tower is made of imagination: our own, and the influence of others. If you want to know how to write, The Dark Tower pushes you to consider what might happen if you didn't.

The first Dark Tower book begins with the man in black fleeing across the desert and Roland chasing. We aren't certain what the man in black is, but we know he must be stopped. He must be stopped because if he isn't, if this wicked force inflicts his influence, the world will continue to fall away. The desert is all at once post-apocalyptic and otherworldly. It's one of an infinite potential versions of earth, gone to waste, forgotten.

With no heroes, with no imagination, with nobody to battle the terrifying uncertainty, the world will move on, decay, and fall into nothingness.

So we band together. In later stories, Roland and his group do not ignore references to other creative endeavors leaking in.

I wasn't kidding in the earlier bullet list, they fight wolf robots dressed as Doctor Doom. They throw lethal Harry Potter-style golden "sneetches" to kill their enemies. They cross through old Stephen King books. They recognize when they're in a Seven Samurai homage. They ally with these cultural ur-stories because they keep the world from falling.

It's the power of storytelling and the need for creative craft.

The Dark Tower is your own assembled mythology.

Imagine the Dark Tower is your entire identity. It's held up by your life's support beams. It's surrounded by your past, present, and future. It's all that might've been and all that could be. It's your bad ideas, your good influences, and your weird dreams.

The Dark Tower is your life: mysterious, inaccessible, and unattainable. At least not without a great deal of effort. The Dark Tower's interdimensional weirdness demands you grow in life before fully recognizing and understanding what this objective truly represents.

Many of the characters in the book so clearly are manifestations of the author: Eddie the junkie, Jake the terrified kid seeing things. They follow the gunslinger blindly, worshiping him at first until they grow up. This is Stephen King recognizing his own mythology, pursuing his tower, praying he can reconcile his own obsessive creativity with all the external forces.

Next up: Writing Free Books to Read Online: How to Outline a Sci-Fi Story