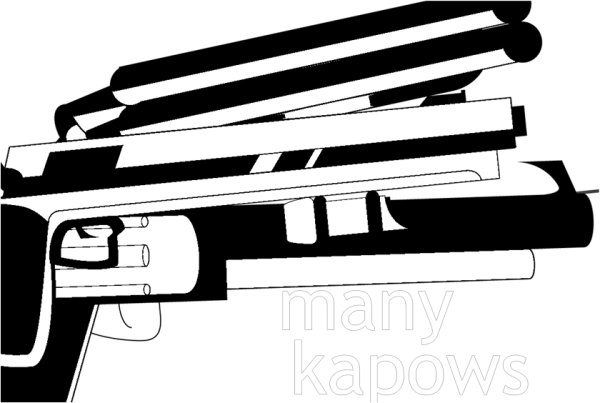 There is no instance of satisfaction. It comes close at a few moments, and for that, we'll give it a point. It looks pretty, the artistic design shining much brighter than the best modern movies, especially Avatar, the high-water mark for the uninformed and the vanilla-bean flavor for people that have io9 bookmarked. For that, again, we'll give it a point, but only half of one because the game sucks at letting you admire the scenery on your own terms. The issue, the repeated issue, is that this is a very accurate depiction of what a science-fiction war on a hostile planet would be like. War fucking sucks, at least for you, non-binary-brained sentience.

There's got to be a very schizophrenic checklist behind modern first-person shooter design. The developers' priorities are strange as all hell. They must have a scenario writer, some art directors, and a trillion-trillion testers, all stitching together what they make, hoping the thing won't tear under a watchful critic's gaze. The problems with the FPS genre, and its ongoing misdirection, is that its developers assume "go" is the only word worth putting money into. If you aren't running, blasting, or running to where you can start blasting again, you're wasting your publisher's rendering money.

Unless the story demands that you "go" at all times, making that your only command dehumanizes the urgency. What drives a gunfight? Urgency. Who do we play as? A human being. Watching a marathon is not exciting because that's only 1/10th of a human being running down the road. Watching a guy that train for a marathon, run it, puke, finish in 108th place, and then goes back to building birdhouses, proving that he could indeed run the marathon with the right humanity and commitment, that gives you excitement and urgency in the race. It makes every footfall a thrill.

Rocky is about a guy that we know should not stand a chance. Killzone 3 is a person we're just meeting, an opening band that nobody has heard of. Their music is okay. We won't look them up on MySpace later.

You never occupy the character in Killzone 3. It's just your gun occupying Killzone's world. If the gun was a more fun person to pal around and goof off with, then this would be acceptable, but see our earlier paragraph for the counterpoint: you're in a war in space where the odds are stacked against your character and stacked double against you, the player. The Helghast (baddies) want to kill Sev (you), but the game wants to kill you even more. Like a bad Vegas magician, it assumes that it's mystifying enough that you won't care that it's sleight of hand. It is not.

This isn't an even trade -- the game doesn't experience joy, so its cruelty only hurts you, the person, and when you outsmart it, it's you outsmarting the game, not the enemy. It feels like cheating somebody that doesn't care if they lose. When you poke the A.I. and lure it into a moronic chokepoint, it's pointing out a flaw in programing, not demonstrative of your tactical prowess. The object of the game is to throw dice and grenades at your scenario, and only when these things are in balance will we be granted victory. We believe that there was a way the game was "supposed to be played" in the developer's mind but the five or ten factors required for that "deliberate" vision for gameplay never arrive simultaneously. When the graphics are clicking, the A.I. is hung up. When the guns are reporting correctly, the levels are bland. When the story is getting interesting, it's quite literally happening on the other side of the planet.

There are constant problems with you clashing against the A.I. It's clear that great care was made to turn this battlefield into a visual clusterfuck of chaos, as good battlefields should be. Everything erupts in masses of dust when they explode. Small gunfire rips up cover. Plate glass is shattered when you spray bullets everywhere. Enemies reel, spraying oozy blood under gunfire. This does everything right. And it is entirely negated by the A.I. The enemies are smart. In fact, they're so smart, they realize that they can win instantly by killing you and only you. There are dozens of other soldiers on your squad, wielding what must be large bullhorns that fire dead hornets -- they can't kill a goddamn thing.

Your opponents will kill you though. Every one of them. They know where you are at all times, they know the instant you're out of cover, they could shoot the fleas of a dog's back at 300 yards, and they know you're the only person that matters. You're the King and they're an entire opposing chess set. They're 16 queens. It's imba.

They can blind-fire from cover, which you can't do. They can shoot through dense smoke without a dip of accuracy, which you can't do, because your senses are attached to your analog meatbag. They can shoot prone from their stomachs, which you can't do. They have infinite ammo, they can take 2 of your shots to the head (one to knock off their helmets, one to bisect their heads horizontally at the nose). We have to assume they don't have fuzzy gray filter that sluffs over their vision when they're nearing death like you do, because they fight just as hard and shoot just as flawlessly when they're one bullet from the reaper.

They have no fear. They do not panic and they cannot be taken by surprise. The last man in an enemy squad, armed with a light assault rifle and with three bullets in each of his knees, will run and dive from cover to cover. He doesn't care if you have a electric bolt-rifle, a weapon that combines the powers of Ahab and Thor into gun-form. Come on, Killzone 3, don't try to give me a story of human drama and then make my "human" enemies efficient, artificial, efficient, artificial, efficient, artificial pieces of robotic code. At least the enemies in Vanquish were robotic because they were, ya know, robots, and their fearlessness was tonally correct. This is the final immaturity in videogames. Tonal inconsistency. We only remember smiling twice while playing:

no. 1) When we first used the sniper rifle. Popping heads makes the same sound as knocking a bully off a bicycle with a water balloon filled with tree bark.

no. 2) When we first used to northern-lights gun. It's the gun from District 9. It hits dudes in the chest with 1.21 jigga-watts of aurora borealis. They explode outward with an acid-tipped whipcrack into green fog. It does have a charge mode where you hold a button to juice the fucker up, which is the oldest, most empowering feeling in games that makes you shout: "Get ready to ride the #FEARNADO, you Swedish pole-smoker!" Keiji Inafune invented this hold-charge way back in 1991 for Mega Man 4 as you primary weapon. You get to use it once or twice in Killzone 3. Brava, Killzone 3.

The rest is using goddamn terrible guns with shitty recoil against a team of hateful game developers. They made strange design choices, putting you in a realistic / fictional war to fight that endless army of videogame soldiers.

We've run out of patience. The game is a perfect example of everything wrong with shooters right now. It plays it safe, it's overly familiar, the things that go wrong are where the emulation of successful franchises falter, the movement "weight" is self-defeating as an attempt at realism because the artificial intelligence is insufferably artificial, the pacing is like a bad science museum tour with your younger cousin, the online leveling system makes people indifferent to playing the game, comfortable grinding their character rather than participating in a game. This grind puts players in the mindset that: "As long as I'm in the game, I'm progressing." There's no need for them to adhere to design or logic when they're always winning a little and your enjoyment hinges entirely on their ability to behave in an expected way.

Videogames are escapism for all but they're puzzles for some. For a majority, merely owning and playing is all the escapism they need. Merely interacting over the Internet with others, if only to ruin your good time, if only to run around with a shotgun like a blinded cyclops, if only to snipe you from half a map away, racking up 5 inconsequential kills, but ruining the map balance -- that's happiness to them. It's like a toddler understanding that she can say, "No," realizing she can effect the world and elicit a reaction. The rest of the people in the world know that "No" is indeed a word that you can say, one of many, and they don't want to play that game but to the toddler, saying "No" over and over is the greatest part of her day. There's an entirely functional language that online FPS players are ignoring in favor of regressing to infancy.

Next up: The 9 Greatest "Who Would Win In A Fight Between...?" Debates