We can't be dead-serious anymore. The kids need to take over a little bit, the literal ones, and the internal ones that live inside the moms and the dads, and the young adults with disposable income, too. After watching Skyfall, I concluded that we had reached the end of the dour, lone-wolf misanthrope era in action movies. Bond is defending the world from real supervillains again, and an over-thought Superman has yielded mixed results. Man of Steel wanted people to leap out of their seats wanted people to leap out of their seats, jaw and fist each clenched, "f-f-f-fuck yeah!" screamed to the rafters in front of God and the old people trying to go the movies, like, once a summer, to see Kal-El.

Sidebar: Superman is a Moses allegory, not a Christ figure, you Luddites! To be a Christ figure, you need to actually die, voluntarily, non-violently, for somebody's sins, to teach them a lesson. (Did anybody else even look at the syllabus?) Superman's a leader, guiding the lost. He was conceived by Jewish writers. He's Moses. He's Charlton Heston. He punches motherfuckers.

Unlike Jesus, he's actually complicated, and very difficult to interpret.

And that's my review of Man of Steel.

NOT QUITE TALKING ABOUT PACIFIC RIM YET!

For about ten or so years after 9/11, the world went through PTSD. All the laws of nature that we had learned in high school or wherever were chucked in the woodchipper. We were left to sort through the pulp. Did this use to be gravity? What about that, is that logic? Is this slippery red thing religion? It kinda looks like HATE.

Suddenly, we aren't hiding under the bed in fear of tangible things like Nazi's and atomic bombs. And that's terrorism in action right there. Guns loaded and without a decent target, the immediate conclusion is that the world is a complex place full of scary things that are impossible to fully-understand. That's why we got an entire decade of weepy, emotional, emasculated superheroes, and lots of rah-rah militarism in our Transformers movies. And stuff starring Mark Wahlberg looking confused and angry. The world is scary, and I DON'T KNOW HOW TO COPE! There are monsters everywhere that hate for no reason and they are can't be beaten! We should do something, but what?!

Know what you can do? You can actually do something. Rather than having an opinion that you can lob from the safety of your smartphone, you can embody an action. Stop jerking off. Stop being paralyzed by your accepted incompatibility with a fear that somebody else invented for the sake of selling marketing slots.

Call the devil by his name. Give the monster a face. Now rocket-punch it into a pulp! It's not a frustrated "f-f-f-fuck yeah!" anymore.

Pacific Rim is a movie about the biggest god-darn fist-fights you ever imagined while kicking over your older brother's LEGOs while he was off on the phone talking to person he calls "his girlfriend." Pacific Rim is the sensation of wading through the shallow end to play pool basketball on the hottest day of the summer. It is one of the all time best summer movies ever.

The cast of Pacific Rim is a mix of Street Fighter II: The World Warrior, Top Gun, and definitely NOT Neon Genesis Evangelion, because they all actually WANT to be there!

I would be lying so hard if I didn't admit all of these things influenced Ghost Little's work, specifically The Diffused States of America, available for download now.

Pacific Rim's world is complex, just like your grandpa's old push-powered lawnmower with the actual spinning blades. Pacific Rim's characters aren't complex, just like somebody that would use an old push-powered lawnmower. (You saying your grandpa wasn't awesome?) The cast of characters go after what they want because they understand why it's important to them -- that's why they strap in. That's why they drill down into the science of the monsters they fight, risking death to understand them. That's why the pilots slip into skin-tight suits and intricate helmets and wade into battle in skyscraper sized-robots to fight the truest monsters imaginable.

That's why we can trust the humans in Pacific Rim when they shout, arms locked in ready-position inside a giant mecha's head, lungs bursting with complete earnestness, "Let's do this! Together!" And they bash the thirty-story monstrosotroid's head in with shipping containers.

When the monster releases an EMP that shuts down the new mecha, our hero, who I'm going to call Buck Killzone, because he's our hero, reminds bossman Stacker Pentecost, which is actually the character's name, that his mecha, Gipsy Danger, is analog, and the EMP doesn't hurt her, we finally get down to business. The good guys swoop in to save the team. From the shoulders of the failed Jaeger, the Australian father-son team shout into the thunderstorm, witnessing the action.

It's crucial to understand: the operation of these robots, the Jaegers, requires the two human pilots. It requires trust and cooperation. It's not a one-man or one-woman fight to save the world. You also can't bring emotional baggage into the Jaeger. It messes with the other person and that will get you both dead. No getting jacked up. No petty bullshit. No eye-rolling at the Will Smith-style fighter-pilot earnestness in Independence Day. No guffawing at President Lonestar's unifying speech before the final assault.

Someday, you might need that imagination and honesty again, so don't take her out back and put two barrels to her head. Don't tell the little girl that that wasn't awesome! Little girls have great taste in identifying the best summer movies.

The music in Pacific Rim is the trace memories you have of your dad singing along with the cassettes he slammed into the tape-deck during long drives. The physics and weight that the Jaegers and monsters (Kaiju) display embodies the excitement of having chicken fights on the shore of the ocean. The battle of Hong Kong in Pacific Rim is 40 minutes of you ignoring your mom telling you to stop splashing in the tub. She's on the other side of the house and she's kinda apathetic, you can tell by her tone. You leave the bathroom flooded -- neon, dirt, and human wreckage left for clean-up. It's just a bath though.

The mess was the fun. Most of the best summer movies are about making a mess.

Some people might complain that the characters are a little flat. Well, those people think a little too highly of themselves. Other people compared Pacific Rim to a videogame. Those people probably like swimming laps in the community pool, and hate their younger brothers. Get over yourself with the videogame comparisons, Hollywood, you would be so lucky to have action as good as the potato chip-crunchy calamities on display in Vanquish. Movie action is usually the camera being flung across a room while burly-tuff men in tight pants repeat a Juilliard dance major's fifth choice in potential careers.

Pacific Rim's action scenes are more like a boy and his best friend (a dog, duh) roughhousing, both of them totally able to see the fire and magic pouring out of every movement and punch that is named, and then SHOUTED, before it is delivered. 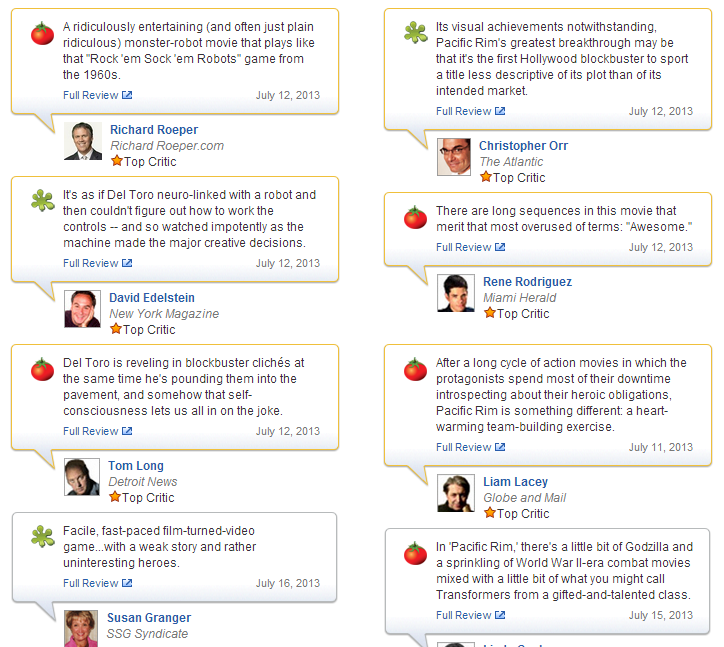 Pacific Rim's Detractors Need To Calm Down And Get Over Themselves

So is your shirt.

Quite the opposite -- it is original, and you're on no authority to say so, considering you're in a long-term relationship with your own unhappiness.

"Well, I found it hard to follow all the battles at night."

Pacific Rim is a pro-humanity, pro-cooperation, battle-with-all-your-might adventure with zero partisanship that is a comfy, oversized pair of boots that a kid can tromp around in. If you don't like Pacific Rim, or you say, "hey, I mean, it's a guilty pleasure," then you need to pick up your cellphone, pull up speed dial, and call your best friend, and tell that friend, whom you trust, that even though your dad never laid a finger on you, he still scares the shit out of you. That's the road you'll have to walk if you ever want to stop hating life.

The movie's originality brings everybody down to the same level. Adult, kid, middle-aged jerks, whomever, this is the Star Wars, the Independence Day of our moment. George Lucas went out and rebuilt the sci-fi serials of his childhood, a passion piece, into an obnoxiously convoluted franchise, and it made a hojillion dollars that one summer because everybody went and saw it again and again. There was no competition. There was no Despicable Me 2. There was no Grown-Ups 2. Everybody went and saw Star Wars and it unified us in its cultural relevance. Parents and kids got to agree that, "heck yeah, that was awesome!"

Bewildered, the only amendment that dad can even make, is, "Yeah, let's try not to use the bad words though, okay?"

Next up: Wii U Sales Are Terrible: So What Is A "Next-Gen" Videogame?

Previously: Unplug This Summer! You Won't Miss Anything