". . .honestly, Shakespeare In Love is not meta enough. . . it is like throwing a bratwurst down a hallway." 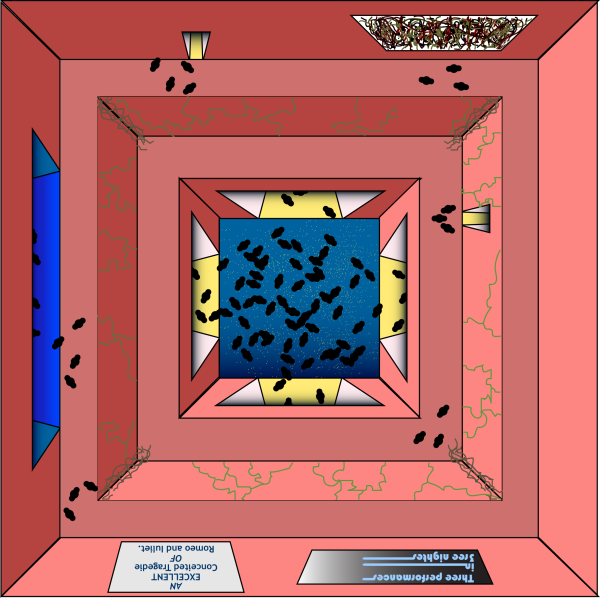 An interesting conversation happened at the bar last week when we mentioned to somebody that we would never see that movie Contagion because it would only increase our hypochondria and that it was weird that they give away Gwyneth Paltrow's death in the trailers and that she had been an overrated actress ever since Shakespeare In Love, a movie which we had never seen.

"Oh, you need to watch Shakespeare In Love. It's amazing. It's my go-to feel-good movie to watch when I'm feeling down."

"Really. That's a pretty big statement. Is it better than Love, Actually?"

"Okay. Is it better than Saving Private Ryan?"

"I haven't seen Saving Private Ryan. Why do you ask?"

"Because Shakespeare In Love won the best picture Oscar over Saving Private Ryan in 1998, which I'm pretty sure was the biggest acts of grand larceny since Prometheus."

That dim-light conversation was how we found ourselves watching Shakespeare In Love and yeah, we did go into this movie on a sour note, a bad way to go into any experience, expecting one thing and instead getting another. Expecting local venison steaks and instead getting a shrink-wrapped mid-sized bratwurst -- not terrible, just disturbing because you're worried about how it was made. Co-written by Tom Stoppard, a genius, it's a very meta-story about William Shakespeare getting writer's block while working on "Romeo and Juliet" and then overcoming the aforementioned writer's block by inadvertently living the play's story himself, and, umm, writing it as he goes. Shakespeare is the Romeo in that sentence. Today, Shakespeare's stories are veritable narrative-engines that you can tweak and tune to run in any environment -- lighten it by setting it as a CG cartoon (Gnomio & Juliet, featuring the voice of Jason Statham as Tybalt), tighten the gear ratio to make it work in modern California (Romeo + Juliet, directed by the mad-Australian Baz Luhrmann), add werewolves and vampires (Underworld, directed by nobody) because werewolves and vampires have blood like soda-fountain syrup and it is joyous to watch it squib everywhere. Those are all just the takes on "Romeo and Juliet," let's not forget those riffs on "Hamlet" (The Lion King), and "The Tempest" (Forbidden Planet). These plays are sort of like wide, straight-line hallways that you can decorate to your liking, highly-adaptable templates tailor-made for being self-referential and tongue-in-cheek meta-narratives, but honestly, Shakespeare In Love is not meta enough.

For all of its borrowing of classical Shakespearean elements like class-warfare and simple misunderstandings leading to big troubles and big troubles leading to fencing-duels and fencing-duels leading to Accidental Poison, this is a movie that's self-satisfied. Stoppard's approach to, ya know, "spinning the whole Shakespeare play-writing story so it's sly and aware, man" is the equivalent of a college student coming into a sophomore creative writing class and saying, "My paper is about my roommate writing a poem about his doomed relationship with a girl whose family has a house in the Hamptons."

Saying that Shakespeare didn't just write "Romeo and Juliet," bro, he lived it, isn't clever. It's child's play. Know what Stoppard should've done? He should've gone further. He should've set it in on a far-flung future space-station where a barely-human playwright repeats history and inadvertently re-write Shakespeare by living that timeless starcrossed-lovers story -- a "million monkeys at a million typewriters" meets "power of love" kinda thing (in space!). Stoppard squeezes references to so many other plays that this could have been a huge mash-up of all the Shakespearean mythos rather than just an opaque retelling with a deus ex machina that doesn't do her job. And there are references, there are Easter eggs, there is fan-service, and there are no bigger fanboys than English literature fanboys, that's for damn sure, but it isn't enough to point to a human skull in the background and assume you've just split the stage-drama atom. C'mon, that's what Family Guy does, sniggering at Optimus Prime copy-pasted into the background during a conversation about robots. Those objects in the background in Shakespeare In Love like Yorick's skull have meaning in the plays come from -- why did they make the plot run parallel to "Romeo and Juliet" if it's supposed to be a Shakespeare origin-story? Is it Shakespeare Begins or is it Batman and Juliet? Well, it's something in between and as a result, we're stuck with an imbalance. The whole message feels misdirected or unsure of what it wants to be, hence the well-documented re-shoots on the movie's ending. The sad part is that Stoppard fucking knows how to write a good, goofy spoof like he did with Rosencrantz & Guildenstern Are Dead and it's tragic that his ideas seem to be a delicious apple-blueberry crumb pie that somebody decided to drop a upside-down German bundt cake on top of, hoping to hide the sugary fruit filling dripping out of the sides and maybe win some Oscars.

Shakespeare wrote comedies and tragedies and romances and sonnets -- most of the sonnets are rumored to have actually been written for one of his male friends, by the way -- so there was obviously more to his talent and legend than one girl that he couldn't forget. He invented words! He borrowed and stole ideas! He wrote fucking "MacBeth" and "King Lear!" The fact that Shakespeare cheated on his wife with no remorse is the least interesting thing he did. Instead of being just "Romeo and Juliet" -- and yes, there were disguises, and deceptions, and cross-dressing, and a third-act turn, and those are all Shakespeare tropes -- this should have been an assembly of the major themes from many plays woven together into a story that's genuinely new. That would have been impressive. Retelling "Romeo and Juliet" has been done better, most notably by the above-mentioned Baz Luhrmann; in Moulin Rouge! The whole back-half of that movie is about them inadvertently performing an Indian version of "Romeo and Juliet" but they don't wink and nod at each other, they just added Bollywood-psychosis by way of French Absinthe-madness and actually had the balls to kill the female lead.

Shakespeare In Love is not a bad movie. It isn't as smart as it thinks it is. It isn't poorly-acted. It isn't poorly-written dialog. It isn't disrespectful of its medium. It isn't as good as Saving Private Ryan. It isn't undeserving of praise but it is given too much credit. It is award-bait. It is wasted potential. It is sugar-neutral. It is Splenda. It is a case of been-there done-that. It is a re-tread. It is like throwing a bratwurst down a hallway.

Next up: The Scotsman And The Whale | Short story no. 7

Previously: The 10 Types Of Bombastic Storytelling