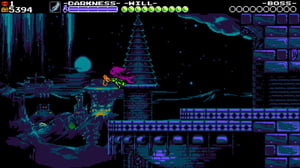 Why is Specter of Torment so good? 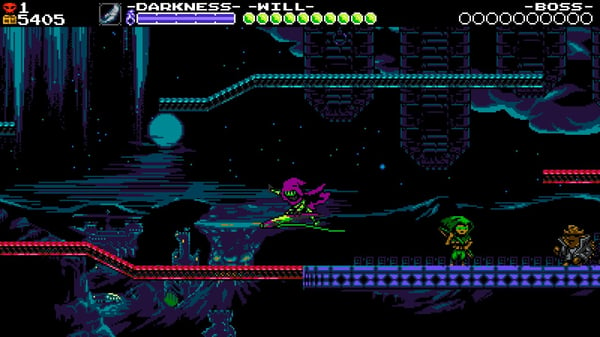 The good taste on display with Specter of Torment is baffling. It's cask-aged, vintage swashbuckling. It includes Game Boy-style sepia tone flashbacks. It's a dramatically dead-serious, capital-V Video Game, shouldering all the implications that descriptor signifies. It's synthesized the gothic aesthetic of Castlevania, the world-progression of Mega Man, and the action of Ninja Gaiden.

Of course, there are two eras of Ninja Gaiden in game history: NES and Xbox. The folks at Yacht Club Games did all the required summer reading, plonked their butts down into chairs on the first day of development, and said, "Yeah, we're makin' Ninja Gaiden II, but in 2D."

Make no mistake, this game is drawing from Tomonobu Itagaki's 3D Ninja Gaiden games on Xbox. Why does Specter of Torment work so well? Because it isn't handcuffed to its own nostalgia and it's objectively inspired by 3D games.

How does Specter of Torment work?

Your character is Specter Knight. He has a scythe attack. Running along, this attack initially feels floppy and short-range, like Raphael in the first NES Ninja Turtles. It isn't sharp, but this is by design. The true attack is the dash-slash. When you bring Specter Knight to a certain distance from an enemy, a jagged line is drawn diagonally across your foe. Use the normal attack button to snap toward and through the enemy. You'll either kill them or do damage, bouncing back in a flip for a moment, where you can decide your next move (it might be another attack, it might not).

This dash-slash option only appears when you are jumping. This is because jumping in games is awesome. If jumping in games weren't awesome, Mario would have been a guy who only walks and runs.

This aerial dash-slash is 100% the Flying Swallow technique from the 3D Ninja Gaiden games, fixed snugly into place in a 2D action game. In Ninja Gaiden, you use it to cut heads off fools and to always keep moving, lest the enemy make a meal out of you. Like the Flying Swallow, Specter Knight's slash-dash is a homing, hyper-sharp distance-closing maneuver that:

Specter of Torment even demands you use this aerial dash to traverse the world. It makes jumping, gliding, and general acrobatics within the game's stages a reflexive song-and-dance routine. Even Specter Knight's wall-run has shades of Ryu Hayabusa's. Collide with a wall and Specter Knight will run straight up its surface. You can wall-kick to another awaiting surface (most, but not all, walls can be wall-run) front-flipping the moment he reaches the top.

@Alex_Crumb You are not wrong!

Again, this is straight outta the "no-wasted-moment" playbook from the 3D Ninja Gaiden games. Not long ago, there were three distinct flavors of character-action: the Devil May Cry / Bayonetta (spicy!), the God of War (bitter...!), and the Ninja Gaiden (juicy!). Now, all action games are sadly either PlatinumGames, with their heroic counter-dodge expert-timing, or Batman: Arkham mix-tapes.

Both are functional and some succeed more than others.

By comparison, 2D action games are finding their spirit among the independents. Specter Knight is a hearty set of sharp scissors gliding through meaty construction paper. Pump those shears up and down and artfully craft a line through the level, why don't you?

What to do with this embarrassment of riches?

Ghost Little is all about being smart with the fun at your immediate disposal. Get for free, get it for cheap, and save your money-spends for the types of developers and creators that bleed to bring you joy.

With that in mind, the question is simple: "Do you have a Nintendo Switch?"

If the answer is "yes," then buy Shovel Knight: Specter of Torment on Switch. There isn't a soul that owns a Switch that shouldn't have this game slotted nicely beside Zelda.

Next up: The Best Free Books in the Amazon Kindle Store

Previously: Free Books and the Democratization of Popular Culture