The Silver, the Brass, the Blood, and the Chorus—Part 1 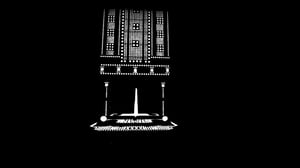 According to the Silversmiths, any antiquities brought in from the Weeping Desert were entirely harmless. This was a decree founded on logic, rather than confidence. The logic was simple enough: if any antiquity truly was dangerous, it'd kill the man holding it well before he made it back into the city limits.

Who could say? Well, the dead, for one. The haunted, for another. They didn't keep a good command over language if the deserving circumstance struck them.

Maybe halfway between Meridian and Icthy where the soil turns to amber a man looked straight down under a noontime sun. A fellow could spot quite a many things down there in the hardened sugar. It wouldn't be difficult to dig down and collect the artifact. Then the timer starts on the consequences, whether he realizes it or not.

Who could say? Maybe the objet d'art was still kicking with an old American ghost? Maybe it plies his soil in two and they both perish from this plane? Maybe the it's an alchemic contraption design to change bone marrow into granite? Such conversions don't take long.

Any number of fitful, hysterical tales can come out of the Weeping Desert, told by survivors in an oil-reeking dens near Meridian's edges. The stories are funnier when the audience is familiar with the truth. Tell the same tale in the Inner Spires about the man gradually transformed into hairless lemur by the rusted automata he unearthed while seeking a decent day's profit, well, that'll make a fellow into quick meal for the moat clams. Nobody in there wants to imagine the truth.

They don't want to know. They've figured they've done all their knowing by the time the Inner Spires welcomes them. Their amber blocks are sliced off the assembly. The blocks are set with brass fittings. Cranes as large as the wind fishes over Mount Acrux lift them toward the sky and the Inner Spires grow ever larger.

That's how they live till they die. Hearsay says they've antiques up there that'll make them breakfast and drive their cars, if they ever figured they wanted to travel.

"Silversmiths say the antiques that cross the border are just this," Orry said to the bartender. He knocked his knuckle on the bartop's wood. He tapped his granite tumbler next to show the bartender what he meant. "And this," he added, taking a swallow. "Wood, stone, it's a total lie. It's hogcock. Antiques, lively items, they're coming in. I've been to the Inner Spires. The rompers up there are just working machines that're working them. They're fixing magic because they can't figure all the minerals."

The bartender smoothed his silk vest. He adjusted his suspenders and took an order from a woman with a peacock feather in her cap.

"Hmph," Orry grunted. He flicked his hat brim up to show the bartender his face. "I don't have to prove this to you."

"We're going up there on a job this evening, far in the interior of the Inner Spires. Figure there might even be ground-access—"

"—Or evidence, Orry. A working automata. A living homunculus. An alchemic vial. Proof. Not hearsay. What do you say to that?"

Orry slipped on his coat. He motioned to the gang waiting in their booth. "I think I might send a wire to the crones. They might be blind, but they've a sunnier disposition than you."

Exiting onto the street, Orry slid on gloves before the acid could speckle his skin. The rain came and went without warning. It washed a good number of citizens down the drains, bones and all. Those who survived till summer were burned, if they couldn't find a decent roof.

Orry faced the idling truck. Rahz kept it in neutral. She pointed forward, asking without speaking. Suna and Rostand were already in the truck's rear.

Orry nodded and climbed aboard.

Next up: The Silver, the Brass, the Blood, and the Chorus—Part 2

Previously: 9 Ways You Can Begin Purging Your Internet Addiction