The Silver, the Brass, the Blood, and the Chorus—Part 2 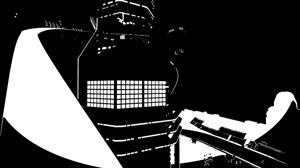 The road elevated. The Inner Spires rose into view, gold slathered over light. At a distance, from the city perimeter, they were towers. Drawing nearer, they appeared uglier to the eye—stubby, inglorious volcanos, long cold.

The truck drew them nearer. The rain was still stiff as a snare line. The corroding tires swept away the gathered acid wash.

"Feel that?" Rahz asked. Orry set his fingertips to the door.

"Wheels are vibrating on the axel," Orry said.

Rahz kept her hand on the wheel. "There are only ten pinches of calliban connecting the drivetrain to the axel, but there are two hundred and sixteen ferrum rivets holding the truck together. The calliban can survive in this climate. The ferrum—" she held the thought, clenching the wheel.

"Can we make the return trip?" Orry asked.

"No," Rahz answered. "Not on these wheels. Not with our skins."

The daylight was darker than the rain. The acid storms that beset Meridian's outskirts were thick with the living stars, the vegnafae, refracting against one another in instinctive ritual. Their calls to one another through the cloudbanks polluted the low sky with each shade of light. The resulting beautiful gloom shone in a gaseous ring over the borderlands.

The roads' slickness ceased at last. Orry angled his gaze for a rare sight at the sky. The dim sun was a white poke on the blue endless. There, at the interior, the Inner Spires spat an atmosphere of silver and ammoniac bases to neutralize the clouds. It poisoned the vegnafae. The result was clear skies.

Instead, the earth glowed. The amber, the gold, and the pinworkings trucked in from the Alemans valley-states two rivers to the north—these were fair trades with Meridian.

Suna slid open the window to the truck's rear bed. "We've leveled off," he said, poking a beefy arm and thick neck through to speak. "Not much of a climb."

The truck passed through a brass archway gnarled with rusty flakes. It wheezed on its bolts as they tore past.

"I'll wax the hammer," Suna answered, understanding. He patted Rahz's shoulder and returned to the rear. Rostand wound the vices into place on the bench. She flicked the crimson hammerhead, eliciting only a dull thud. It was well-set. Suna passed her a yellow bar, she sniffed it, then climbed onto the stepladder to hold it over the hammer. She gathered a tiny pinch of calliban and dusted it over the yellow bar. The wax dissolved into liquid, pouring over the hammer in a translucent ooze.

The wax hardened. Rostand, wrinkly, rough, and only as tall as Suna's waist, climbed onto the bench with a chisel once she was satisfied enough time had passed. One tap at a time, she knocked larger chunks of wax off with the chisel and then polished it with a silver brush. She unwound the vice and lifted from her hips to present the hammer to Suna.

He put his thumb over the hammer's contours—the whole tool as long as his wingspan. He nodded and he touched his gigantic forehead to hers before helping her down off the bench.

The truck's brakes snarled as Rahz pumped them. A decay far worse than rust was collecting. Nevertheless, the vehicle halted as directed.

Orry exited. They were parked before a mountain-sized palace of brick and mortar. Overhead was the brassy dome of the Inner Spires. The cranes swung the amber cubes into place, homes for the new arrivals. The weird, new heaven was stacked far above.

"Not a great view," Rahz remarked, neck swung back and eyes up.

Orry slung his wide-brimmed hat off and let it hang around his neck. He undid the buttons on his acid-stained coat and hailed an approaching man. The man was a remarkable youth in face and features, but dressed with a servant's graceful formality.

"Are you the theed?" the servant asked.

Orry nodded. "Certainly am. This is Rahz, Suna, and Rostand, with me to take a look at the property." Suna and Rostand came around the side of the truck. They kept still, empty-handed, exchanging glances with Orry. "Beautiful location," Orry remarked.

"Can you estimate?" the servant said. He wobbled his hand side to side with the question. "There are a good number of antiques inside that have the owner worried. They're behaving oddly—begun behaving oddly, recently, I ought to say. So she's noticed."

"I can't say for certain until we're inside."

"Can you estimate though, in your experience—I-I recognize it's difficult—but, please."

"Based on what I was told—" Orry stopped short. "It may—I'd wager this would require two thousand pure silver heads."

"That'd be five hundred for each of my team."

"Of course. Whatever you feel is fair. This is fair."

Orry waved at Suna and Rostand with only his fingers and a pointed look. They nodded. They left the truck where it was parked and headed toward the palatial home.

"Very fair," Rahz said as they parted with the grateful servant. "We'll be respectful and thorough. Thank you for welcoming us. If we discover any dangerous antiques, we will remove them."

Next up: The Silver, the Brass, the Blood, and the Chorus—Part 3

Previously: The Silver, the Brass, the Blood, and the Chorus—Part 1