The Silver, the Brass, the Blood, and the Chorus—Part 4 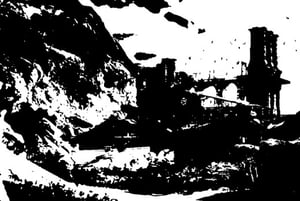 "We're gonna check the solarium, the hedrons, and the gallery," Rahz explained into the foyer's echo. "We're looking for signs of inhuman life. Imprications, biomechs, or anything that runs on quicksilver. The initial request scoped ground access, if that wasn't already made clear by the drive in, we haven't confirmed."

"The owner could confirm it," Suna suggested.

Rahz held up one finger. "The owner is not currently on the premises."

"This is a simple job," Orry said. "Don't over-think it. Don't fantasize. We're being paid a good chunk of change. Till that angle tilts, the hammer stays in the truck."

Rostand kicked Suna, sending him wincing to one knee.

"We're taking the silver today," Orry said. "That's enough for now."The palace was a staggering sight. Its architecture forked from a central hub. The walls were brass and silver.

Suna took the left corridor to the solarium. Innumerable antiques leered and lurched in ways he had never seen. Tiny cylindrical robots polished one section of the hall marked by lit sensors. Then they rested. Suna passed through. Half a moment later, they returned to their task and cleaned the space again. An oil painting in a bloody frame was set on its side, likely too heavy for its hook, and its inhabitants—men astride battle steeds amidst explosions—were breathing and raging with an aching slowness. They posed no threat though. Strange, and certainly haunted by some craft, but no threat.

The solarium was a spherical room. A platform extended out before Suna as he approached the center. A spyglass the size of their truck flowered at the center, gathering what light Meridian offered. Angled by mirrors, it littered the solarium with humming energy. Black and gray plants slithered the walls. When they grew too close to the crystal ceiling's apex, they burned and came apart, becoming ash, catching the breeze, and blending with the energy synthesis.

But no harm was brought to Suna.

Orry peeked into the hedron. The room was of infinite emptiness. At its center, a polyumbran the size of his hand twitched and folded. Almost perfectly black, it still bounced some light in the infinite whiteness. He touched the polyumbran. It flowered into a bed. In total obedience, it rendered the remainder of the room with an appealing, rustic feel. The walls it drew around Orry peeled with turquoise paint here and there. The furniture was ancient, but soft. It even populated windows and a false exterior, writing a muddy blue lake and a snowy mountain range beyond, caught in a wisp of cloud.

The great gallery's seashell spiral wound up toward a golden pinpoint at its mountainous peak, countless floors above. Rostand came to the room's center and flopped down on the stonework. Her arms and legs shot out with glee. Her eyes were pinned at the sight. Light dripped like settling steam from the ceiling, beautiful and wordy.

Far off through the glass roof were the Inner Spires. Down at the bottom, near the ground, the gravity was a delicate blessing. Rostand hugged herself and wriggled with a smile.

"Notice anything?" Rahz asked, kneeling next to her. Rostand shook her head. Rahz sat beside her. She swapped between different lenses in her goggles—yellow, cosmo, spectro. Each showed her the drifting light with new appendages or staging it within a new aura. All robbed her of breath. Rahz removed her gloves and touched the stonework. The vibrations sang in her nerves.

Satisfied, she sat up slowly and began her examinations. The hall was decorated with immaculately-maintained antiques.

"The hedron is functioning normally," Orry said, arriving at her side. "Nothing threatening. Nothing suspicious."

"The solarium's impressive," Suna admitted next as he joined. "But it's stable crone magic. It's running simple biological cycles. I watched it for a while. No variance."

"I've noticed," Rahz said, then stopping short. "Much too much—"

"There is a reliquary here," Rostand said. She tilted her finger and pointed down. "Beneath our feet. We find it. We discover the danger that pays silver. We do not take the silver. We take the danger. We feel regret. We return. But first, we go to the reliquary." Rostand looked at Suna with her ancient face. "Get the hammer."

Next up: The Silver, the Brass, the Blood, and the Chorus—Part 5

Previously: The Silver, the Brass, the Blood, and the Chorus—Part 3