—Don't be simple. We're about to see something far more absurd.

This movie is stealthy. Because, I mean, goddamn, it was SUPPOSED to be a commentary on how dumb chicks that go to spring break inevitably get what they deserve when they scream too loud, when they go too far. Lookit how insufferably moronic they are! Spring Breakers has got their number. Let's sneer at them and the way they know, fuck, they just KNOW in their hearts that they're destined for greatness, and for change, and they scream-puke Britney Spears songs in a 7-Eleven parking lot to demonstrate to the audience how closely they hold their bubblegum lamentations. Fun fact, the song featured during that sequence, Baby, One More Time, was recorded when Britney was still a 17 year-old Disney muppet. Britney makes her presence felt again, later, so make note of how your eyes almost rolled back into your skull while the girls were singing in the parking lot.

These dumb co-eds are just insufferable—at this point, they are just, simply, merely, ONLY insufferable. And the movie is little else but a stage for them to twerk on. 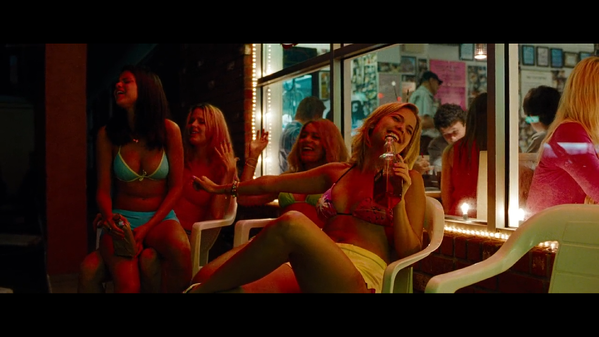 Then something happens. It's like a Shakespearean turn. I described Spring Breakers to somebody as a combination of Boogie Nights and Apocalypto, a story that extends its sticky, sweaty hand to you and draws you into a modern society on the far end of collapse. Florida gives off that vibe naturally. Your handlers, your guides, are four self-important girls that believe they're on a real-live spiritual adventure whose dark delusion is so wretched, it must be meant as some sort of warning to the Millennial generation.

It must be! Right? Everyone has it one for the Millenials. And in a way, director Harmony Korine does have it in for The Kids, but he doesn't come at this thing from the front. He comes at it from the side. Like a velociraptor.

He accomplishes this by nixing the moral of the story and doubling down on wickedness until the absurdity collapses into itself like a punctured sex doll.

The film's story begins on a monochrome Florida college campus. It's as exciting as concrete.

Ditzy and bored, the four girls (three of the four, technically) steal a car, snort a few rails of yay, rob a restaurant, and use the cash to hajj their way to spring break. After some fun, and an arrest for possession, a local named Alien, played by James Franco, bails them out.

They are vulnerable and barely dressed. He brings the girls home. They continue to party, with townies this time. He grin-shrieks to the girls about his big-money lifestyle and his accoutrements like nunchucks and fine oils. He explains his rivalry with former-best friend, rapper, gangsta Big Arch.

Alien seems poised to do what townie creeps in movies are known to do. Creep (v.). The good Christian girl smells the Florida and leaves. Three girls remain.

The Huffington Post review equated Spring Breakers to Scarface and Britney Spears. That's a fair assessment, but it's also taking the easy way out. When the shit goes down and the two girls who have proven to be the dumbest and most psychotic of them all, start seducing Alien by having him suck the barrel of two guns at once, and it turns him on, we are miles and TIMEZONES away from Scarface and Britney. The hyper-weirdness of the movie's second half informs the "shocking, sexy kids" first half, so the self-importance and supposed-liberation that they felt while singing Baby, One More Time earlier is magnified because the stupidity and cartoonishness of such a thing is made obvious when they ring-around-the-rosies with AK-47 while being serenaded by Alien with more Britney on the piano. At that point, the movie loses all pretense of realism, and you suddenly realize that it never was realistic, and then you realize how scary it is that some people might have thought that it was. There's a haha-goofy sequence when they put the good girl on the bus to go home, and it's just so bizarre that the massive transit Greyhound picks up its passengers on a sidewalk running through a picnic area, inches from the ocean. It's so staged. It's like she's getting voted off of The Bachelorette, and it's about that honest with its emotions. She has to leave the party because she's scared. Okay, that's normal, but when the next girl decides to leave, it isn't because of some normal, girls go to spring break and things don't go as planned reason—she goes through the same getting-on-the-bus sequence because she got fucking SHOT in a drive-by. 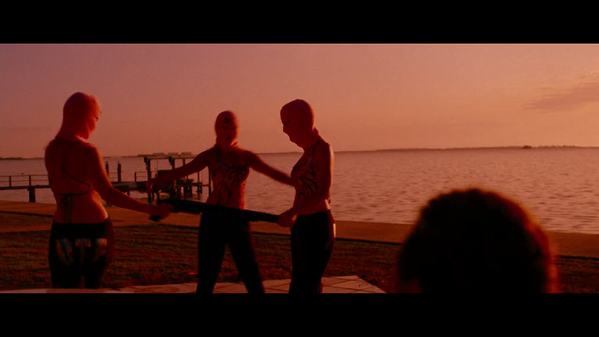 This isn't Scarface. It's not even a rad, 90's-style music video. It's closer to something you would see on Adult Swim at 1am. It's total, irreverent absurdity. It's Aqua Teen Hunger Force. Nothing is sacred and every character is a delusional fuckhead.

Everything concludes with a Bonny and Clyde-style slo-mo siege with the last two (cuh-RAZIEST) girls teaming up with Alien to attack Big Arch's mansion. Alien dies instantly. The girls, in sneakers, bikinis, and pink ski-masks, shoot and kill every person in the mansion and steal the rapper's Lamborghini. They drive off into oblivion during voice-over where they call their mothers, promising to be better people.

The absurdity of the back half of the film asserts the absurdity of the more "realistic" front half. The girls want to dive into debauchery and have fun without any repercussion. It goes so far, then further, then off the edge, then it takes flight, something nobody could have ever expected, and then it returns and carpet-bombs its first half in self-mockery to teach the audience the simple lesson that the characters certainly won't learn.

Don't get wrapped in the mythology of something absurd like spring break—it's all fake, absurd, and only a psycho would want that kind of thing to last forever.

Next up: Why We Must Criticize Grand Theft Auto 5's Immaturity