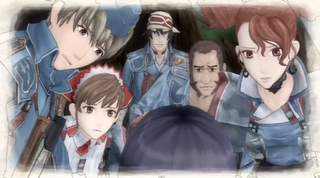 Valkyria Chronicles is Japan's stylized interpretation of European nationalism in the late 1930's on the eve of World War II, set in a dramatized and renamed and rearranged version of the conflict. It focuses on war, and the people fighting it in, better than any game ever created. It terrorizes you with a swelling, banal dread that somehow accelerates beyond mere fear. The game gives you control over battle, because it's a videogame, and it gives you control of your squad's base camp, because it respects you. The story impresses upon you that the objective in war is to survive, but you will because you have you control over the battles, you can't help but be compelled to win the war. You never even had the chance to remember that people in stories don't have to wait until the end to die.

Some have recently suggested that there should be a war game where the first twenty levels involve your character waking up and manning a machine gun nest for days on end with nothing happening, because that's what 90% of war is -- magnified boredom punctuated by magnified horror, the likes of which most of us will never have to experience in life. Nor will we ever have to comprehend or retell that horror for the people that are transcribing the history books. Actually, one of the best books ever written, Catch-22, is all about men in World War II doing their best to simply survive and maintain their sanity on an airbase in Italy while periodically bombing mostly-inconsequential targets, and a majority of the story is just them coping in their own personal ways. They seemingly have the power to stay safe on the base if they insist to their commander that they're mentally unstable, but if you have the wherewithal to make such a statement, then it's obvious that you have self-preservation, and could not be declared insane on those grounds.

So these men have freedom and control that does them no good.

To kill time, some of them make a game of their letter-censoring duties. Others volunteer for ditch-digging duties on the base, reiterating that time, and life, never passes slower than it does when you're doing difficult manual labor. They're grasping for even the most meager control, and when they are able to claim just a shred, it's defiance, and it's life. Then Snowden dies. Seriously, ready it, it's brutal. Also, read Slaughterhouse Five, it's been a while since junior year of high school, you'll probably get what's going on this time around.

Joseph Heller did irony before it was cool, perhaps cementing himself as Hipster Prime. See, what Catch-22 did was show that there was routine and repetition in war, which kept people ironic enough to survive the insanity of methodical murder, but it also made the crueler moments all the more brutal. Valkyria Chronicles has a routine to it. You get to know your squad's strengths and its limitations. There are story missions that move things along, but there is squad maintenance to do around your base -- fix guns, add armor to your tank, coach recruits, generally just take a break from the killing. For a long while, the killing is cartoonish too, shit, it's drawn like an anime, but as the game goes (this is A Game That Goes, by the way) the war too goes, and goes, and goes. Seemingly minor characters that you've gotten to talk to in passing begin to die in combat because of your own tactical recklessness. Isolated stories about rescue (hints of Saving Private Ryan) spring up, and stories about investigating dormant supernatural artifacts in the desert (hints of Indiana Jones) appear, and shades genocidal racism (scary-hurtful hints of Schindler's List) creep the shadows. Not only does your squad of wise-cracking, individualized soldiers (hints of Where Eagles Dare) get all the dangerous missions, they end up having to revisit the places they once thought were liberated to find them blasted apart under choking charcoal-skies, understanding that the war is still going, and going, and going.

The game's true genius is the simple skirmish missions -- modified, re-issues of story missions with extra twists, suggesting that your squad is not simply pursuing the main mission, but continues to actively participate in sorties when the infantry demands it of them. And these skirmishes help your squad members, all of whom are actual people with faces and names and backgrounds, become accustomed and used to war. They get faster and stronger. It all happens gradually and it becomes routine. 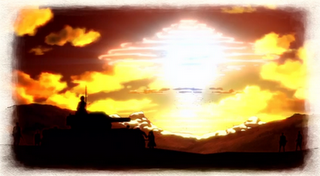 And then the routine breaks so fast it gives you whiplash. Some battles involve careful planning and desperate engagements that inevitably end with the enemy claiming a smothering victory. And that's just how it happens sometimes, you'll lose, and the story forces you to deal with the loss. The softest battles are often the most intense. There's one where you have to assist the limping scout, Alicia, through the woods at night. There's the one where you return to your home town to find it blasted apart and overrun by snipers. There's the beach-head storming mission where you cut through an entrenched barricade to seize a bloody victory, only to have one of the best characters finally settle a grudge in the mission's closing mini-movie, the same kind that happens at the end of every mission -- and then the character is shot dead, and you have no chance to save her. No matter what you do, it's still an interactive war that you can and must win, but it will take control away at the worst moments, exactly how it should. If there ever can be a best game, unfortunately about war, this is it. It's long, brutal, occasionally boring, always intense, and above all else, never really in your control.

Next up: The Raid: Redemption | Movie review

Previously: Why The "Tropes Vs. Women In Gaming" Videos Make People Angry