/// Is the little boy the last guardian?

Your player character in The Last Guardian is an unnamed boy. You and he wake from consciousness, captured, tattooed during sleep without explanation, and locked in a dungeon with a chained monster. The boy, as an old man, narrates the game from the very beginning to tell the player he survives this ordeal.

The story becomes one of "how does he survive and escape?"

The monster, the Trico, demonstrates loyalty to the boy almost immediately. The boy frees the Trico from its shackles. Trico follows the boy through the empty castle. Recognizing crumbled statues throughout the architecture, it's clear there were once many Tricos, and they are a storied species. Humanoids have worshipped the Tricos before. The boy's Trico is innocent and child-like though. The castle is spare. Nobody is around. The boy's Trico might be the only one left.

After guiding the Trico through part of the castle, it becomes clear the animal would not be able to survive without the boy. It's a big, dumb baby-animal. It has to be encouraged and cajoled to follow. It usually disobeys commands.

Trico needs the boy to survive. 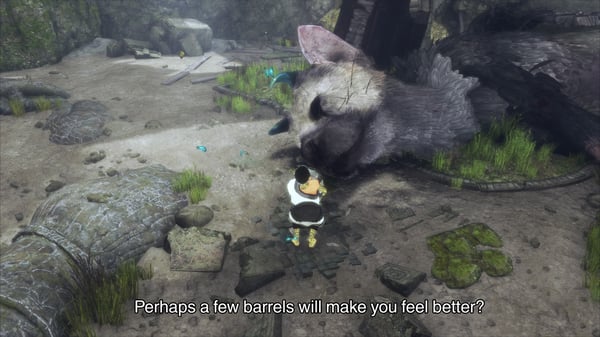 Okay. It's decided. The Trico is an idiot adolescent and would have died instantly without the boy's protection. The boy is the last guardian. Trico is a unique creature and the player speculates the boy's future role will be one of protection, narrating this story someday in the future.

But then, another trico appears. It's armored and violent. The boy's Trico must protect him.

// Is Trico the last guardian?

As a player, one immediately assumes that your player-controlled character is somehow unique. That's how we're programmed as entertainment consumers—that we've been given an exceptional lens for an exceptional story. In video games, we'll either puppet-master a fantastic, powerful character, or project our perceived insignificance onto a blank slate and empower them as we'd like to be.

Of those two options, which is the boy?

The floppy, clumsy leaps when mashing the "jump" button weakens an argument that this boy is physically exceptional. He can hold up a mirror and guide Trico to destroy stuff with a lightning tail. He can call and direct Trico to a degree.

But the boy cannot comamnd Trico to mutilate the armored ghost knights roaming the castle. Trico does that on his own. Trico is so eager to demolish these attackers, the boy must calm him down after each encounter.

That's hardly a fantastic, powerful player-character. Does that mean the boy is option B: a blank slate? He is, after all, only an unnamed boy.

If the boy is unnamed, insignificant passenger on this experience, that is nearly evidence enough to confirm Trico is the last guardian. Story context at the game's end cements it even further.

Trico defends the boy from the second, armored trico. Closing in on the story's conclusion, the boy's agency lessens with each encounter.

The boy holds on.

The boy takes the stairs.

The boy holds on.

Trico mauls an army of knights.

The boy pulls a switch.

Trico eats the boy to protect him from harm.

A flashback movie tells the player about how Trico stole the boy prior to the game's start. Trico took the boy from his bed, swallowing him whole, and on his return flight to the castle, he is struck by lightning. Wounded, Trico fell. The boy unchained him. This was where the game began.

/ Trico is the last guardian.

Trico's horns, regrowing gradually as the boy feeds the animal barrels of unknown stuff for the game's duration, act as signal receivers from the white tower. These hypnotic signals make Trico berserk at various points. Inside the white tower, the boy discovers a magical, malevolent tar that powers a mechanism that coerces Trico and the several other tricos, all larger and armored.

Atop the white tower, Trico defends his boy against an onslaught from his bewitched brethern.

It's further revealed that the barrels of unknown stuff were crystalized people, assumed captured from their homes like the boy was. The white tower powers the machine that makes them into barrels—food for the tower's trico slaves. Even Trico's protective abilities, swallowing the kid like a baby bird, were perverted by the white tower.

Tricos weren't meant to be slaves. They're animals. On instinct, no longer brainwashed, the boy's Trico became a protector.

In comparison, on instinct, desperate for survival, the boy attempted to leave Trico behind and get the fuck out of the castle by himself. 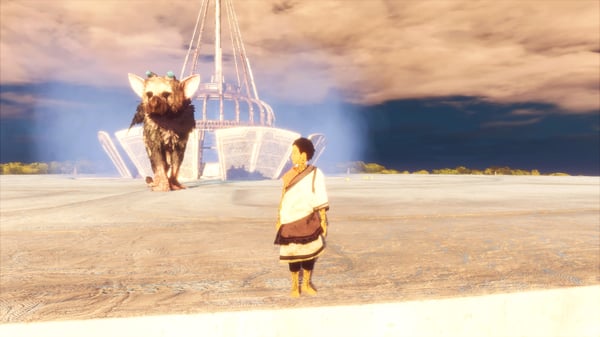 The Last Guardian isn't a story about the boy. He isn't a character. He is a vehicle for a player to observe Trico's story, a mistreated beast. The game presents a world indifferent to the player character, a world that does not misbehave or incorrectly respond to player input, no, those are the wrong words. The Last Guardian is a game where wild external forces attack and defend you, helpless player.

The Last Guardian is a test and a question—will you accept your insignificance and weakness in a story that, for once in a video game, isn't about you? Will you let yourself be saved, to be guarded?

Trico defends his boy. Trico is the last guardian.

Next up: 2017 Fast & Furious Character Power Rankings (Or, Fate of the Furious)