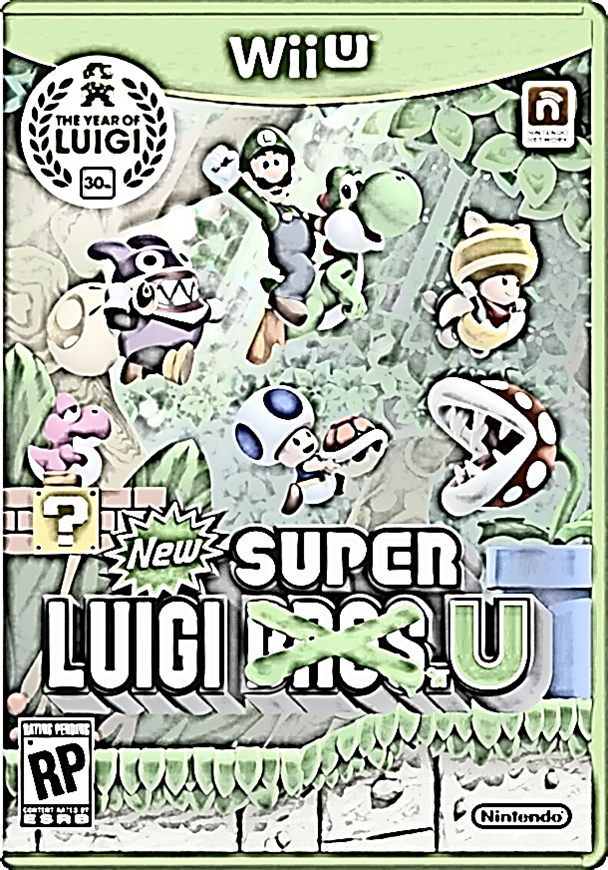 I remember making that bet with my brother. I remember choosing Luigi over Mario, since in Super Mario Lost Levels, Luigi can jump higher, sacrificing the red plumber's rock-steady control for a pool noodle in green overalls. In New Super Luigi U, Luigi's same extra-high jump and those same slip-slidey, be-bopping shoes, skittering around like he's got squirrels duct-taped to his feet, they were right there waiting for me on a Tuesday in 2013, nearly 20 years to the day after Super Mario All-Stars brought me Lost Levels on SNES.

The first level claimed 5 lives from Luigi. Thank god my brother wasn't there. He probably would have asked me why I kept jumping down into that pit on purpose (was it because I wanted to die?).

There's a learning curve in New Super Luigi U. That might not appeal to certain people. It's Mario's summer vacation, you're basically having the same kind of adventure you normally would, except Luigi is taking you by the hand into the sun, onto a boat, where things are floatier and the attitude is different, because you're in international waters. The rules are a little different.

Notable differences in the New Super Luigi U DLC:

1. You only get 100 seconds to complete the level (NB: I never died because of this restriction because I'm not a whiny punk)
2. There is no halfway-flag -- if you die, you go back to start
3. Instead of Mario, you control Luigi, in all his wibbly-wobbly, roller-skatey, high-jumpery modesty

The rest of the world map and art style is lifted right from New Super Mario Bros. U. That's great. That game was a-okay with me.

This game -- it's just different. It's not Majora's Mask different -- it's more like Luigi's Adventures In International Waters: The Emerald Pants Mystery. What you need to understand is that this is when Nintendo does well. Nintendo is usually like CBS -- clean, efficient, popular, not terribly diverse. They make Mario, or remake Zelda, or pump out Mario Kart games. When Nintendo gets weird though, they kinda become FX -- oddball, dark, varied, and almost inaccessible. These are the grungier dudes making Majora's Mask, F-Zero GX (I know it was made by Amusement Vision, so just don't), New Super Luigi U, and Wave Race: Blue Storm. Games that hinge on well-oiled mechanics where the team spent most of their time perfecting the hinge, the oil to keep it moving, and the very metal the machine is made of, rather than the actual door you pass through.

In these cases, the action is the reward. Where you were and where you go next is inconsequential.

Honestly, it takes about 40 seconds to beat a level in New Super Luigi U. That's if you don't die. You can be greedy and try to find the all 3 star coins in the level, chances are slim that you will succeed on your first go, though. That's alright, I'm more than happy to re-explore these levels again later -- probably with my brother in co-op.

Man, these levels are well-designed! You can smell them like cocoa from across the house. They're like a PhD candidate's poetry dissertation, mimicking the styles of the masters. They demand you leap, slide, wall-kick, and be risky. There ain't enough of that in game design. Risk! Risk is often the thing that you throw out there to look cooler or to earn an explosion of color, or to pose like concept art, to make you think, "Yeah, once in a while, I feel like a videogame badass." Here though, you're just Luigi, you're always Luigi, don't fight being Luigi -- if you die, you'll just take another crack at it.

I get why people get grouchy about these things. Why they get upset about games changing from what they're used to, or that they don't change enough, or that their powerful brains decide that one thing ruins all other things therein. Well, honestly, give it up, you grumps. You don't get to decide today what will become your nostalgia twenty years from now. Have you ever made something? I don't mean a sandwich, I mean a thorough piece of art, out of your own volition, a project, a story, a program, assembled, cut, burned, and rebuilt? Do you know how hard it is to make a videogame? Do you know how many videogames suck? Don't stress that you don't adore all things, and don't act like you've split the atom when you find flaws in something that other people are alright with. That's what Republicans do, okay? That's what your dad does.

Things change. Good stuff stays the same, or it improves, ever so slowly. Improvements are remembered by the old and touted by the young. Somewhere, maybe there's a kid that really likes Mario games, almost all of them, and he can probably describe why in 10 minutes, and then go make a sandwich, and have some hot chocolate, and talk with his brother.

One day in 1993, I beat world D-4 in one try, navigating Bowser's castle, slipping by fire-windmills, flung hammers, and giving a head-fake to the dragon before cutting the bridge and winning $20, the exact price of downloading New Super Luigi U to your Wii U console, 20 years later.

Have a nice Wednesday.

Next up: Unplug This Summer! You Won't Miss Anything

Previously: Why The Xbox One Is An Awful Invasion Of Privacy

Tagged topics in this post: Review, Wii U Review