The Avengers: A New Era Of Shared Universe Movies

I remember walking out of a podunk two-screen theater in May, 2008, and it was still cold. My ego was glowing and my friend and I were congratulating each other. We had previously relished in the noir film Kiss, Kiss, Bang, Bang, starring Robert Downey Jr. as an wit-soaked con man who was clawing and self-narrating his way out of the gutter of small-time New York crookery into LA’s equally-loathly private investigation scenery. Seeing Downey as a maximum-level skuzzball in that film armed my friend and I with insider knowledge that not many knew—he was visionary casting as Tony Stark, aka Iron Man.

We hadn't really realized this was the start of the shared universe craze.

Downey was arrogant. He was a recovering drug abuser. Like the best of such men, he was a rock ‘n roll buzzsaw. He was Iron Man.

Our foreknowledge helped us into our seats. Our giggling excitement upon exiting made us call all of our other friends, assuring them that a relatively obscure superhero had just starred in a fantastic movie. Spider-Man 3 had arrived the year before to great disappointment and comic book movies could assume this was the beginning of the end for them.

Iron Man reversed this course, be you acolyte or otherwise. It was a fratty action-comedy. You need never mind who Iron Man was. Most people considered Robert Downey Jr. to be that dude late night talkshows jabbed for an easy laugh regarding drugs, lost promise, and an alcoholic tolerance usually reserved for Wade Boggs. Iron Man is not burdened by its comic book roots, “just go see it,” we told people. It’s fun like ice cream.

“But, remind me again,” I said to my friend. “What SHIELD is and who is in the Avengers?”

“Oh, damn, you can be Thanos in this game?!” another friend exclaims to me. 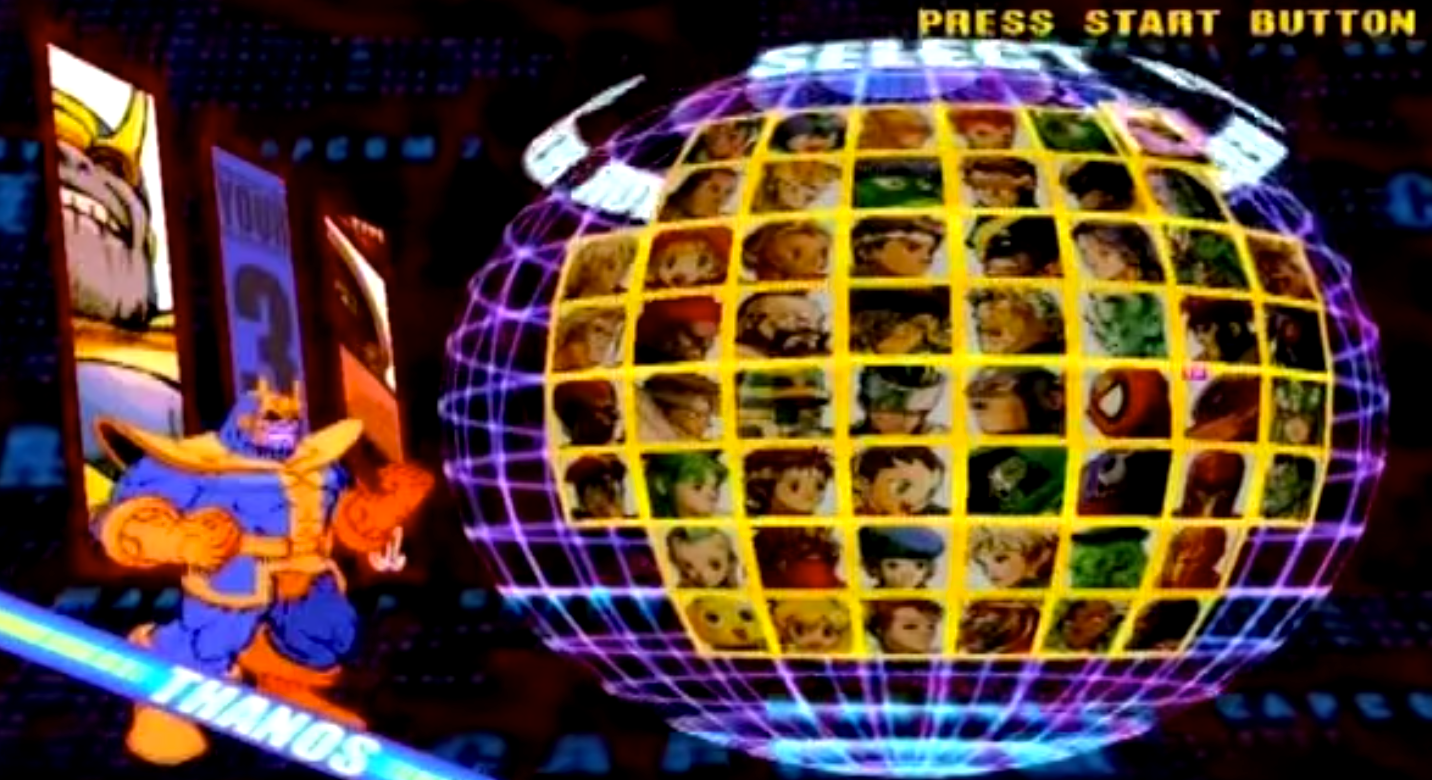 We have just downloaded Marvel vs. Capcom 2 to my PlayStation 3. It’s an obscure fighting game from the early 2000’s, few copies actually exist, and it’s rather rare. In response, the game’s manufacturer released it for digital download. We’re cycling through the character select and discussing whether we can identify all of these video game and comic book-types available—Mega Man stands alongside Wolverine.

One square-shaped, purple-skinned villain with some cruel shoulder pads not meant for earth’s atmosphere is selectable. His name is Thanos. “Who is Thanos?” I ask.

How Marvel Invented A Shared Universe For Its Movie Characters

“Why was Benecio del Toro dressed like Liberace from space?”

My girlfriend and I are walking out of Thor: The Dark World.

Since Iron Man in 2008, nine movies in the Marvel Cinematic Universe have been released. Each film in the shared universe references another, the characters discussing events that had happened in years and films passed—even if they didn’t star in them—and others foreshadow things to come. They have formed a serialized universe more akin to a modern TV series than a usual film series. As the most popular movies with an ever-expanding audience, they have earned the privilege to know that if the right threads are left hanging, viewers will feel compelled to research, and to talk, and to speculate.

“Do you remember that big evil-guy with purple skin out in space at the end of Avengers?” I asked. “That was Thanos. He’s in love with the physical embodiment of Death and in The Infinity Gauntlet, a comic book from way-way back, he almost conquers the universe after collecting all the Infinity Stones.”

“Right, that was what Benicio del Toro was holding onto for the guys at the end of Thor 2?”

“He’s playing The Collector. Apparently, he’s a character in Guardians of the Galaxy, which comes out in 2014. The Infinity Gauntlet was a really big Avengers comic where Thanos forces the Avengers, and all the guys from SHIELD into these can’t-win scenarios and picks them apart little by little to impress Death. At the end, everybody’s dead, Hulk, Iron Man, Thor, everybody, and it’s just Captain America and Thanos, and Cap hits Thanos, and says something like, ‘Well, we had to try.’ Thanos was so powerful from all the Infinity Stones that there really was no chance they could win, but Cap is a badass and he just had to hit him.”

“I’d watch that movie,” she states.

These movies exist at the perfect time. In the first episode of season 2 of the modernized Sherlock Holmes series produced by the BBC, Irene Adler tells Sherlock that, “Brainy is the new sexy.” Geeks have evolved into the dominant social and cultural species. They have brought their gospel to public consciousness. Everybody is encouraged to follow along.

This ended up being a huge inspiration for me years later as I developed a shared universe for my series of novels.

Not only are these films crafted to be appealing to all potential moviegoers, rich with accessible action and comedy, they are rich with mythology. Not verbatim from the comics. That would be an outdated, suicidal approach to film-making.

Instead, they exist as movies and as conversation pieces. Drawing from history, but not copying it directly. Those who know their Marvel comics can be fonts of knowledge for the ones who didn’t grow up reading them. They do not know everything though. The speculation takes over. This draws the viewer into a co-mingling world. Most welcoming is that it’s a simplified, less noodly world than the street-puke that is fifty years of these characters in the comic books.

Also, most of the male actors in the Marvel films are very good looking. It appeals to all comers.

However, it is no great secret that most people are dorks. Most people will hide that they are dorks. They might go for runs, and do yoga, and watch football, and TiVO Cake Boss, and hit the gym, and commute to work in traffic, but they also read Hunger Games. They play every Zelda game. They might have grown up reading comic books over and over. They might have even written some of their own once.

Because they want to know. People want to know. The back-story. You don’t want to miss out on The Big Thing. People want to be part of it. These days, when it’s obvious that so much stuff is going on, thanks to abundant knowledge-proliferation, there really is a lot that you have to know.

Yeah, we saw it. The conversation continues.

The Avengers changed everything.

One of the biggest movies of all time is:

It is an irresistible conversation piece. The stories are simple, they are action-adventures, after all, so the unexplained loose ends are the things people discuss. Placing them at the end of the films is another stroke of genius. It matters less if the entire movie was sturdy, the conversation opens at the close—what is SHIELD, and who are the Avengers? 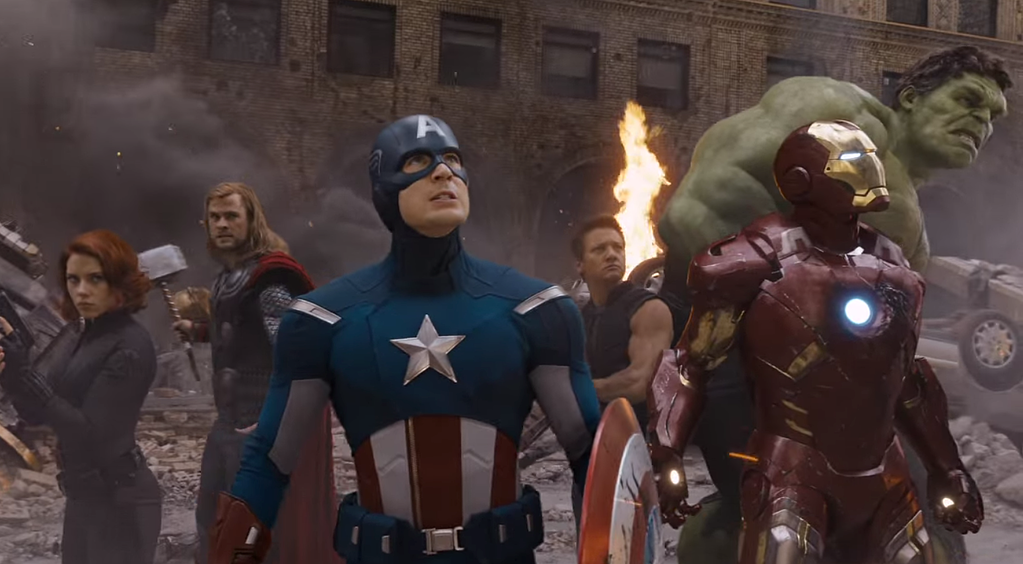 “The Avengers are Iron Man, Captain America, Thor, and Hulk. And some other guys, too,” my friend explained to me in 2008, standing in the parking lot behind the local movie theater, which it shares with the town library. “And Samuel L. Jackson plays Nick Fury, who is sometimes a black dude and sometimes a white guy, but he has an eyepatch. And they work together when there’s some bad guy who is too much for any one of them to fight.”

When a bad guy is too much, they call in the cavalry. It comes to me. The Avengers is like a season finale of an ongoing TV show. Of course hot-and-cold fans will tune in for the payoff.

Imagine if Bruce Willis’ character from Die Hard knew Rambo, and Jean-Claude Van Damme’s kickboxing character from Bloodsport, and Schwarzenegger’s character from Predator, and they all had to get together to fight an invasion of Predators. Well, first, you would get something like The Expendables, which is an okay movie, especially the first one. Second, if you’re somebody that had seen two of those four movies, you’d at least have an awareness of the others, and, sure, you’d watch that.

Suddenly, though, you want to know at least he basic premise of what happened in Predator, especially if those are going to be the bad-guys in this next movie. You thought you were a fan. You were. And now you’re free to learn about the back-story of Frank Dux (who is actually a real person, used for the sake of a good example) to help enhance your viewing experience of what will be the largest film franchise in history. The notable difference between those 1980’s action classics and the Marvel movies is not the kid-friendliness, or the merchandizing potential, or the rampant special effects, it’s that each movie is ostensibly its own genre.

They’re all thematically different. They are not all “action” movies or “comic book” movies. I’ve spoken to friends that like the Iron Man movies but don’t like Captain America. Others like Thor’s doofish appeal but don’t much care about any of the others at all, so they only watch the Thor movies and The Avengers. There’s something for everybody. Each compliments the other. It encourages those with perhaps no experience in a certain genre or with a certain character to explore outside their comfort zone.

I don’t know a thing about the Guardians of the Galaxy, the next Marvel movie to come out. It’s my deduction that it has a whole laundry basket of things that I like though: outer-space, sassy talking animals, hot action, and answers on what Benecio del Toro was doing at the end of Thor 2. It’s been a little while since Captain America: The Winter Solider showed up, a political action-thriller masquerading as a superhero movie, and now I’m getting very excited. It’s a feeling akin to returning to visit a friend and the chance to hear more of an ongoing story. The fact that it is continuous and rewards good attention, while being a collective cultural touchpoint, makes the Marvel movies a new kind of serialized entertainment.

Mindless, yet mindful. Dorky, yet poignant. Esoteric, yet relevant. Singular, yet never-ending. This is popular culture in our interconnected age. If you want to understand the state of a society, study its popular culture.

What does this say about us right now?

Next up: The Terrible, Epic Haircuts Of Destiny's Character Creator