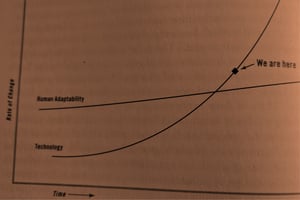 This is easy. For every 1 tweet you notice that is compelling, whether as news or human insight, there are one thousand three hundred thirty-seven that make a great case for single-payer healthcare because, dude (and it's always a dude), there are therapists who can and will help you.

Social media like Twitter is sorta a brain-lozenge. You suck on it for a second to either cleanse the taste or get a new flavor. Is it helping or hurting? Hurting. In most cases, I put my money on hurting.

Quitting social media cold turkey is tough. Begin with scaling it back. Stop following people one by one. See how much you miss it. In week, it'd probably be gone.

Spotify is. . . okay. For ~$10 / month, eh? You can make a playlist, whip around the block like a god-tier radio DJ, but after a few months, you're just listening to the same few albums anyway. Switch over to ala carte digital music, or continue buying vinyls. Playing music and hanging out is cool, alright? Playing music and driving a car is really cool. Having content paralysis because you can't elect which song to pour yourself into when the entirety of human history is at your fingertips does you no good.

I'd say it's alright to buy things digitally and not break your 'quit the internet' rule. If you're orthodox, then, yeah, you'd have to switch entirely to vinyl.

Put all my eggs in the Instagram basket! That's not entirely a joke! Also, have you tried Pinterest? It's like a magazine you curate for yourself.

There's a certain craft that goes into social posting. Instagram is the least insane and demands the most work in creating something compelling. But here's the thing, try not following anyone. Use Instagram as your own personal photo album. People can follow you all they like, but don't follow back.

If somebody wants to find you, well, call, dude. Or text. Keep yourself in that ecosystem.

4) Unsubscribe from all recurring emails.

I've worked in marketing for 5 years. Companies that send out email blasts are literally bound by law to include an unsubscribe feature on their messaging. Fines can reach $1 million in Canada if you don't. They aren't hecking around up there.

This means all those notifications from your bank, Amazon, the cable company, the blogs you subscribe to: cancel them. Set up auto-payments for bills, switch over to paper, or just get into the habit of paying them online. Again, I wouldn't count 'paying bills' on the National Grid site to count as the internet because their web presence is basically a phone number with fonts, and without the internet's other distractions, it's a get in / get out situation.

As for the blog emails, we'll find a way to replace the MOST IMPORTANT CONTENT IN THE INDUSTRY, oh, wait, that's not vital.

This includes Email and the Google newsfeed on an android phone. Bit by bit, scale them back. Eventually, your phone would be for calling or texting. While you're at it, man, it's be cool to get a flip phone again. Do they still have those?

Heck yes, they totally do! Lookit that thing! It's got a 5mp camera. Oh, which reminds me.

Nevertheless, if you don't have a phone that does stuff like take photos, taking photos would become a less mundane activity once more. It makes the photos more special. Regaining the time chugging down trashy social media, those moments can be spent On The Realness.

Hah! That 8 out of 10 difficulty sort of a joke. Library cards are easy to get. Just go to a library and ask. You probably wouldn't even have to ask nicely and they'd have to give it to you. But let me tell you what, man. Libraries have free books. They have digital books. I've been inspired myself to build out my own library of free books to read online. We should all be so noble.

If you live in the New York City area, you can even stream Criterion Collection films if you have a library card. That owns.

Yeah, you'd have to pay for news. Then again, it'd only arrive once a week, nicely packaged, and without the speculative, panicked noise of the shrieking news-beast bleeding its way across the collective unconscious we cling to in AD 2017.

News isn't content. News is what's happened. Content is usually news about other stuff that doesn't matter, so, yeah, you'd really like to keep that trash from occupying space in your brain.

While you're at it, subscribe to a local paper. They're often only 2 or 3 times / week. The world is huge, but it's also very small. Take not of the goodness around you before you want to barf all over your keyboard at the sight of the bad news coming in from around the planet.

9) Make a list of things you'd do and figure out which ones you could start doing today.

Next up: The Silver, the Brass, the Blood, and the Chorus—Part 1

Previously: The First Thing You Consider When Selling Your Content