We've been lulled into entertainment complacency.

Through no fault of our own, an entire industry of focus-tested laser-fun has been directed at the middle-class folks with the largest stash of disposable income. It's one Disney remake and shared universe after another, and to top it all off, a thousand and one YouTubers born after the year 2000 shrieking about a destroyed childhood.

Look, I had to get a job in 2008. Don't try to talk to me about destruction. I barely had money to make rent. I owned a camping stool, a laptop, and a box fan when I moved into a sublet in the north end of Boston. The shower stall was in the kitchen next to the stove. I was writing free books to read online and catching local TV off of rabbit ears.

When this was reality at the starting line of adulthood, forgive us for staring wistfully backward.

We had long memories and plastic childhoods. We've no future but over-education and mounting debt. The millennial generation stares down the barrel of what's to come and would prefer to retreat. And our entertainment media is happy to oblige. We never had a chance to grow up before nostalgia seduced and fucked us. Now we're trapped, crippled, and complacent.

It's important to understand the state of these things. Our media consumption habits reflect our epoch, or leanings. When we narrow our gaze to only what's in the rear-view mirror, delivered to us by a few corporate-owned waterways—sending all profit back to the same wide-reaching corporate entity—civil thinking will not advice. It can only doggie paddle in circles.

We believe Stranger Things or any Netflix alternative is the best we can do. It's a half-measure. We need to go deeper.

How do we fix this entertainment complacency?

Ghost Little began with no mission statement. I had several aspirations, namely, to flex my writing skills and to write the dumbest metaphorical explanations I could imagine regarding the films, music, video games, and books I was consuming as an early adult. But it was inconceivable that it was more important than my life itself. Now, there's actually a plan to self-publish free books to read online. I can get them onto Amazon. I can bring them directly to an audience.

But, again, there was no mission—no purpose. But now, there might be.

Ghost Little's purpose is to publish free books to read online that foster discussion and community among its audience. All the elements at play in these free books' creation will factor in. The craft, the composition, the recreation of thought and meaning, it will rise to the surface in a way that the creator-class is meant to. 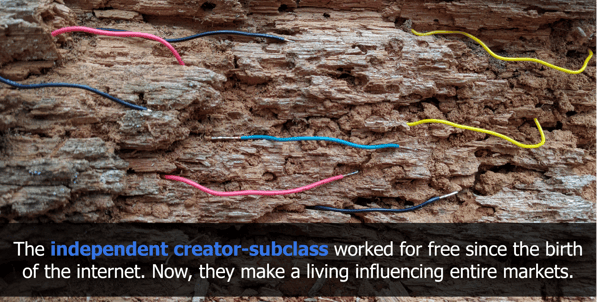 The creativity doesn't need to be channeled through perverse avenues anymore to earn legitimacy. How do we solve the issue of idling as a society, wallowing in samey entertainment: remakes, branding exercises, reaction videos, and unboxing?

We give the money back to the creators themselves. We land and expand. We go to Kickstarter, Patreon, and GoFundMe.

We de-emphasize size and return that scope to what entertainment is meant for: to lead civil thought forward.

Involvement doesn't cost a thing. Production and living for the creativity is what needs funding. The community and communication between creator and audience ought to be a given at this point. That's why I've begun streaming my writing on Facebook Live.

The craft, my goals, and my intent are all available for the readers to see. I structure and outline the novels. I write 2000 words a day in the morning (the morning is the best time to write for me, and for most, btw), and execute promotional work in the afternoon.

What does the audience get out of this? It means every function is accounted for. No effort is wasted. While I can publish free books to read online, the eventual intent is to produce a physical good. Printed books are still a major factor in the world, just ask Amazon as they open up brick and mortar stores.

As I've said, I've read some books. I've read things on the internet. They're mostly bad. They're doggie paddling. I, we, and you deserve better. Support creator-driven efforts.

Next up: Video Games vs. Netflix: Alternative Entertainment For Busy Adults

Previously: How to Write a 500-Word Long Blog Post in 45 Minutes