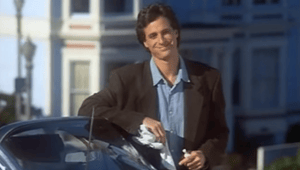 Something happened in the 1980s and 1990s. The name "Daniel" became synonymous with "jack-bag" in TV and movies.

Why this happened is a question researchers have not yet unearthed from humanity's own darkened history. We can only examine the evidence of this plague.

I fear this study will only summon further questions. But you must learn from history, lest you be doomed to repeat it...

This freaking movie, man. It's kinda great, because it's just kid-Rocky.

It's also kinda terrible because Daniel-san is an insane, ferocious butthole that wants to hurt other kids at his school and make a girl date him.

His name is Danny, and he's the reason this list exists.

The original Ninja Turtles movie is a remarkable, weird martial arts film by today's standards. It fights by the Shaw Brothers, who were long-time collaborators with Bruce Lee, and it has puppetry by Jim Henson.

And then there's Danny. Danny is the potential child growing up wrong that throttled America's fear-throat after Reagan accidentally flooded inner cities with crack in the 80s.

You'd have the pre-teen audience surrogate, Danny Pennington. Son of Charles Pennington, who is the boss of an actual character, April O'Neil, Danny is meant to amplify the threat of the Foot Ninja den and its seduction of the innocent.

Wait, did I just write that? This Danny kid sucks.

Poor Danny Torrence. The fact that he has the Shine isn't really his fault. His dad is also a drunk haunted by a mob of ghouls.

Still, he messes around where he shouldn't, and he doesn't listen to Scatman Crothers.

Wait, hang on, this Danny is kinda resourceful. He realizes his dad is going axe-nuts. He immediately sides with his petrified mother. He calls for help.

He's just a blameless victim of circumstance. Jeez, Stephen King sure knows character, even if they are named "Danny."

Vintage Travolta in the film-musical Grease is a teenage scumbag who likes singing about his car and attempted rape more than sticking up for a girl he genuinely got to know over the summer.

Grease, like most stories, is one of arrested development. By the end, Danny has gone so far as to transform his best gal Sandy into a subservient piece of fellow human trash, rather than evolving into a better person himself.

Men named Danny are filthy. Travolta is exhibit no. 1.

5) Daniel Plainview: There Will Be Blood

The most sarcastic sales-bro ever to conquer the medium-old west.

Played in a brilliant performance by Daniel (AGAIN with the Daniel!) Day-Lewis, Daniel Plainview (the character) is a thieving grifter, profiteer, and cruel oilman. He steals a local town's land. He adopts an abandoned child to help improve his image. He disowns the child after he goes deaf in an accident.

He beats Paul Dano to death with a bowling pin right after heckling the kid about how he stole his land.

What the heck, Daniel!?

The dude has a "D" on his future-jumpsuit, signifying how proud of his Daniel-ness he is. You truly are living la vida loca, Daniel Witwicky.

Then the moment everything gets real, and Optimus Prime dies, Daniel can't handle it. This child is literally growing up during a robot-on-robot war on his planet, he lives a life of total white privilege, and the second he's separated from his idea of normal, he falls to tears.

This Danny is a literal white supremacist. His brother, Ed Norton, is a former white supremacist, fresh out of jail for murdering a black man. Ed Norton suggests maybe his little brother was misinformed about the hate and supremacy.

In spite of this, Danny still prefers the whiteness. Later, he's shot and killed.

Don't be a skinhead, Danny.

Dan is a weasel, like most people named Dan. He feels entitlement, lacks empathy, and lives only to climb the political ladder in Washington DC. He's a pathetic, desperate backstabber. He usually gets what he deserves. Perhaps writers are finally granting Dans their just desserts.

UPDATED: 9) Danny Rand: Iron Fist and The Defenders on Netflix

Enough has been said about the Marvel Iron Fist show on Netflix and its faceplant landing. However, there's plenty left to be said about its main character, Danny Rand. Let's do the math:

That's all for now. Did we miss any?

Next up: Are Short Paragraphs Better Than Long Paragraphs?

Previously: How to Download Free Novels to Kindle or iPhone