Original sentence:
A major challenge that marketers will face in 2016, is the ability to make data driven business decisions.

Not counting the extra comma at the midway point, fracturing the thought and forcing us to rewind our brain to recall what we're talking about, this sentence confuses the main topic's importance. It wants the challenge to be the topic, when it turns out that "make data-driven business decisions" is the point they're trying to make. The fact that it's difficult is an element of that, not the exact point.

Re-written sentence:
Creating data-driven business decisions will be a major challenge for marketers in 2016.

Original sentence:
Your thank you page will help to continue to educate your leads and get them to the right resources for when they are ready to decide to buy.

Notice the "will help to continue to educate" near the start. That's what I mean when we talk about confidence. It's future-tense "will," but also "to continue" and "to educate." It's a scramble. It happens again at the end of the sentence, "ready to decide to buy." There's so much to trim out of this. It'll be clearer.

Re-written sentence:
Your thank you page continues your lead’s education while providing resources for when they decide to buy. 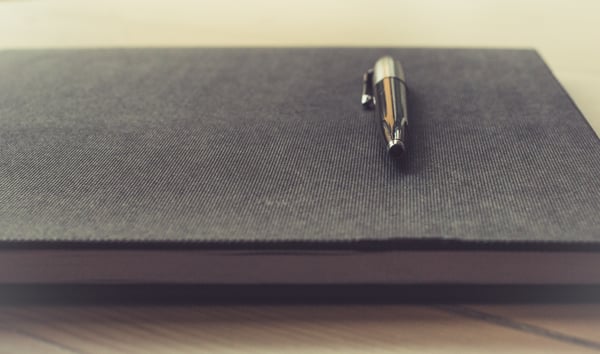 Original sentence:
A lead has made it to your thank you page, which means the offer was of interest and relevant to them. If that offer was helpful to them, what else can you offer for them to learn about?

Using "which" after a comma or "that" to continue a sentence is often flimsy. A sentence can end if the idea is whole. A separate whole idea can have its own sentence. There are more than enough sentences in the world! Next, notice how the sentence states the offer was "of interest and relevant" in one sentence, and then suggests the offer was helpful in the next. People are scared of using the same word in two consecutive sentences. While a varied vocabulary is good, don't be afraid of using the best word, or words, for the job consecutively. It affirms the statement and can make it poetic.

4. Too many ideas in one sentence.

Original sentence:
My way for this class was not to support a “drill and kill” approach and grade them per se, but rather to complement the course’s video progression (which is terrific), support the concepts and give students an added tool to internalize the learning and pass the Certification Test itself, which was the outcome I was looking for.

This would be a fine sentence to say out-loud. I'm usually one for using common parlance on writing to keep it human, especially in written dialog. However, this is an idea-stew. Every comma could be its own thought. Every thought could be its own sentence. The stream of consciousness is a powerful tool. I wouldn't advise using it in business writing though. Let's re-write this one long sentence into four shorter ones.

Re-written sentence:
My method for this class was to avoid a “drill and kill” approach on curriculum and grading. Instead, I aimed to complement the terrific Inbound Certification’s video progression. I supported the concepts. All I did was give the students a tool to internalize the learning and pass the Certification Test itself; the precise outcome I hoped for.

5. Passive voice and using punctuation as a tool.

Two elements glare at me in this example. The first is: "is a phrase that." The second is: "is strategically using a." Both are passive, leaning away from the verb, "to be." That cripples your ability to present a confident thought. Furthermore, the writer doesn't define "SMO" until the second sentence. Also, other terms go undefined. Fixing the passive voice and more diligent punctuation use can fix these issues. Here's the re-write.

Those are just a few examples. To recap, don't forget what the sentence is truly about. Second, remove extra words to help prevent passive voice. Next, limit using "and" to prevent run-ons. Contain your ideas within a single sentence whenver possible. Last, don't be afraid to use appropriate punctuation tricks like parentheses or semicolons.

Next up: 5 More Examples Of Why Short Sentences Are Better Than Long Sentences In Business Writing

Previously: The Best Summer Movies no. 2: THE WARRIORS | A Walter Hill Film

Tagged topics in this post: short sentences are better than long sentences, how to write