The Sea Comes to Shackleburg - XIX 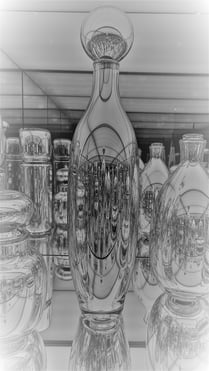 Onward. Each broken stride an aching attack for my own existence—an army of thoughtlessness in the form of footsteps. I gave no credence to the confusion. The impossibility. My body still yearned to continue onward. Clarity was absent within and without. I was walking on water, upside-down, backward, on my hands, yet there remained compulsion, and obliged. I could not believe the sight before me, of a storm reaching out like a god hand, attacking the Earth itself, and there, defenses were raised. Lightning struck back at the assault. The statuary deflected the blows from this sinister attacker. But how could this be? What treasured science did I then behold? A gathered spirit? An unspoken will? A life more total than you or I might ever gather in one journey from womb to tomb?

Francesca leaned on Jordan. I felt Jordan against me. I summoned the will to carry on further from their unerring guile—to walk into the ungodly hurricane descending on any good sense. The archive was there. Horseshoe-shaped and stone. Old, like the Fort and the Clock Tower. I understood then that the archive rested within the statuary, as a mausoleum rests within a cemetery. They were a pair.

The statues raised their spears, and swords, and tridents, and books, and wings, all ferocious and strange, and not all human. The statues’ highest points dithered in picaresque repostes, sending the stabbing lightning bolts away in bewildered humiliation, and the thunderhead’s salvos were forced to begin anew.

We beat on through the gate at the statuary’s edge. We limped beneath the down-thrusting hiss of lightning forks. Each blast destroyed the color on our faces and we flickered in what remained of reality. Down the path—wary not to look up, lest we observe the churning interior of an insane mind—and into the archive without hesitation.

“How do we find it?” I asked Jordan. “The telegraphs?”

I caught sight of a boy just a little younger than myself in the reading room beyond the entryway. He was sitting lazily on one of the many lengthy tables, left leg dangling over the edge, and the right propping up his book. The tall windows, thin as arrow-slits, flashed with the rolling thunder battling above.

“Oh, dear, what danger,” the boy said, voice dry and humored. “Say it once more so I can hear—you are here for telegraphs?”

“Yes!” I yelled, only to find my words muted by a blast from the storm outside.

“Tell us, Chase!” Francesca shouted. “This is no time for your childishness.”

“Time? Time is an illusion,” Chase said. “The only time is now. The only place is our perception. Professor Loomis was right all along. I fear our society’s lilting masculinity is to blame—”

Jordan snatched Chase’s book and backhanded him with the open page. “Enough with your unearned calm,” she spat. “I don’t know whether to call you an ontologist, an archivist, or a fool, but in any case, you’ll answer my question, or I will literally open your mind.”

“Yes. That’s it. Violence,” Chase laughed. “Do it. Take me apart. It’s such a sharp tool. You’ve done so well wielding it.”

Jordan raised Chase’s book, but I lifted it from her hands. “The Forty-Seven Telegraphs of Professor Kendrick Loomis,” I read her from the cover. I looked to Chase. The boy smiled through the patch of pink swelling where Jordan had struck him. “This is a happy coincidence.”

“Was this what you meant?” Chase asked with a grin. “Yes. Happy coincidence. Exactly what you sought. Exactly the answer to your question. Fortunate for you. Let it open your mind.”

Jordan patted Chase’s rosy cheek with the back of her hand and pushed him to sprawl over the tabletop. He shook with soft laughter.

I found a chair at the next table. Beneath the raging storm and Chase’s childish giggling, I began reading the first telegraph.

The blue sap rushes cold and fast down the mountainside into the basin. It is the season.

The dorduna swim, end to end. They feed. They grow gigantic and strong. Those are best seasons. Fleets dispatch from Kulu. They hunt the leviathans. Dorduna flippers are harvested, and, skin, beak, tongue, and meat.

Additionally, on the topic.

Mizar is the soaring sun. A white diamond. One hundred and eight stars over Goria. They gush. They are luminous. The stars are luminous and kind over the sand and the sea.

Run without halting. It is the season of Mizar. Energy is abundant and you are strong.

Mizar is oldest in the ring. Dominant of the First Four. Calm, wondrous, and giving. Sap flows beneath Mizar. The planet drinks deep in his season.

Aeris is the city. Its homes are plentiful. Its brass bells are cooked green by age. They ring when the watch welcomes ships. Aeris has no walls. It celebrates arrivals.

Of the elemental extremes.

Vychen is brightest sun. I present myself to her. I welcome her return. Vychen carries the planet through summer orbit. Goria celebrates growth and harvest during Vychen sols.

Mizar is oldest sun. His heat is low. His light is finest, most beautiful. He soars above now. He asks little.

Third, Acrux. Shy. She is quick, brief. Calm, green, and we rest. Acrux is balance.

Megiddo is largest. Dominates other suns. His energy and light dwarf the rest. Under Megiddo, industry. Kulu, enemy of Aeris, endures, thanks to Megiddo.

Know of the seasons, gentlemen.

Mizar is first to weaken. I watch him die a beautiful death. His light deepens. Never fades. Not yet. Only sweeter. Gorgeous. Praize Mizar’s low light. Adore Mizar.

Long has Mizar faded. Mizar faded when the suns were young. Mizar is in conflict. The suns once spoke to one another.

Mizar was fearful. He was fading. Each pass across heaven. Adoration. His core is iron. It trembled in terror. He could see no other light. He could only die.

Even light knows of death.

In the sky, Megiddo spoke to Mizar.

Megiddo to Mizar: ‘Mizar, the people love you most of all. Your light is the most beautiful. Why do you fear?’

Mizar to Megiddo: ‘I fear because I do not wish to fade, Megiddo. I fear what I may become. I think of nothing else.’

Megiddo to Mizar: ‘Mizar, my brother, remember that I shine with the greatest strength, and yet the people despise me. Your light fades with graceful splendor, and they worship you. What have you to fear?’

Mizar to Megiddo: ‘I fear what I may become. I fear passing away from love. I think of nothing else.’ And Mizar and Megiddo parted.

Next, Megiddo spoke to Vychen in the sky.

Vychen, the brightest, most giving light of the First Four. Vychen could do as any of her siblings. Vychen was unpredictable. The young adore Vychen. The old, uneasy.

Vychen is most cunning light. Megiddo begged curiosity to her, Vychen to Megiddo, in passing, ‘Fading light becomes darkness, brother. And darkness is a mockery of being.’

Vychen had lied. She had grown hateful of Megiddo. He was dominant, and cruel. Vychen always followed Megiddo in the sky. Always, she heard the young painful cries against Megiddo. Vychen pitied the young. She would hurt Megiddo.

Megiddo to Vychen, ‘I have seen darkness, out beyond the black end of space.’

Vychen to Megiddo, ‘It must not be allowed to grow into equal power with us, brother.’ And Vychen and Megiddo parted.

Megiddo to Acrux, quickly, ‘Acrux! I am the brightest, little sister. Mizar is the most beautiful. Vychen, the most kind. What purpose does your light serve?’

Fleeting, Acrux to Megiddo, ‘I bring equality.’ And Acrux, a green streak, vanished into the black. She may return. She will return.

The suns hum in orbit in the south. All suns pass the Emperor’s Lighthouse. Mizar will pass out of sight. Megiddo will rise next. A new sight will begin. A different age will begin.

The light is changing. Mizar is fading.

When weary, sleep. When weak, grow strong. When empty, create. When lonely, seek companion. Alone. Need falls away. Out of the mind.

Will it save you?

We can only burn.

Fall away. Survive death. Civilization does not form around death. They don’t know how. None knows how. None try. No mind is mortal, until death.

Make pain a memory of a bygone era. I cannot avoid the pain.

Inattentiveness. I am no longer welcome won't welcome me anymore. I see and smell everything. I am lost at all times. Murderously aware. Life will eat me alive. My bones will snap.

I am the last surviving speaker of a dead language. I will never speak it again. Not in whisper. Not in shriek. Not joyous. Not damned. The tools made to make words now burned. I camp here, on the mountainside. I do not know how far up the slope I am. Thinking makes pain. Speculation makes pain. Aggressive. Determined. Violent meditation. Unhitching from the usual tethers.

Keep the shining light. It must. Do your part. Brim with joy. None wish to labor. None wish to work. All wish to survive. The machine will not run without survival.

Boundless energy. Devotion to a reward for hate and service. A structure, burning, as designed. Leisurely fire spins in the sky. The suns burn, immortal. I burn for a moment. Vanish. The suns do not.

I slid my fingers across the page. I came to the window. Out of the dark cloud poured a weighty liquid the color of sky. It heaved and churned but never grew into foam. The blue surge washed away the statues and crashed against the archive’s windows, never halting, never slowing, drowning all I could see.

Next up: The Sea Comes to Shackleburg - XX