The Sea Comes to Shackleburg - XXI 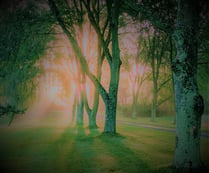 I woke. My mind had been elsewhere. I recognized later that while I had been wide awake and functioning, holding conversation, and going about the morning, that memory eventually went missing. I know for some time, I was asleep—unconscious, perhaps—and at other times, I was wide awake. Neither formed memories. It all went missing, corrupted like a drop of poison into pure water.

The last events I can recall for you, reader, was an anachronistic conversation in the infirmary. I was once again locked in one of the witches cages. Piece by piece, I remembered the students gone missing, the illusive women’s dormitories, and the names I’d heard, but never had the opportunity to meet.

I was too comfortable beneath the weight of blankets and secure in the mysterious prison for witches to sit up. I waited, instead, for the speaker’s voice to come around into view. It was a man I had never met before. He was bearded, old, and stately. He appeared magical.

“Hello,” I said. I propped up on my elbows in a display of welcome, as well as one can when locked behind bars. “Good morning. Who are you?”

“I am Professor Richter Viharo,” the old man said. “I am head of the Oral History department. Funny. Am I the only truly significant individual on this campus you haven’t the chance to speak with yet?”

“It has been a busy morning for me, I will admit,” I sighed. I still felt tired and leaned back in the bed, using the propped pillows for support. “I came here, Lord, was it only two days ago? Oh, what became of the storm, rising from the clouds in the valley below? Are Francesca and Jordan okay? What about Jasper and Ianto at the Orrery? Can you explain what’s happened?”

“I can,” Professor Viharo said, sitting down beside my bed. “We ran out of time. And space, if I’m being perfectly honest. The encroaching cloud was a harbinger. It represented a manifestation of a fear of total homogeny. Of all thought and creation’s potential absorption into a soup of calculated sameness, come from a place beyond the stars.”

“It is the most alien, the most unrecognizable monster imaginable. One that does not honor your personhood. One that would indeed gobble you up, bones and all. It longs, in a way, to know and possess you, and spread a salve on your fears—in return, it consumes you, and your mind, as you know it, and all your potential, is forgotten. When the sea truly comes to Shackleburg, someday, we might not be able to fight it outright. Because it is death, and sadly, you are no better than the father you ran away from at the very start.”

“That’s reductive. He was selfish and brutal. I came to this school to better myself and to better mankind. Don’t attempt a false-equivalency of his cruelty with my recognition and desire to be rid of all his faults.”

“You wished to live forever though.”

“I thought you were here to explain what’s happened?”

“And I told you we’ve run out of time and space within the exercise. It was quite an exercise though, wasn’t it? We sit here now in the Harry Potter ending, where a kind old man fills in the plot holes about police arrests and clues non-perspective characters uncovered while you were unconscious following your malformed confrontation with the antagonist.”

“I—” The anachronistic statement confounded me. “Now I truly do not understand.”

“You’re right. I should call it a Lord of the Rings ending. In fact, let’s not talk about Harry Potter anymore, or ever again. No prophecies. No chosen-ones. No destiny. Hobbits! Tiny characters that rise against a dark and complex world they’ve no business confronting, and yet, their supposed simplicity proves to be their greatest advantage. Brilliant. Now those are stout, admirable characters. It’s no wonder they’ve been borrowed so many times.”

“They’re not important now. How would you have liked this all to end?”

“With greater clarity, for one. I still am confounded!”

“This was never going to end on time. That’s not the point. The exercise was to see if we could reach the end of November. And we did! Try not to worry about the plot holes or dangling story threads. With proper dedication, I’m sure we would’ve circled back around. In narrative parlance, those are called ‘trap-doors.’ You give someone a bit of wire and a book of matches in the morning, and by the afternoon, they’re picking locks and burning away ropes. How many buildings on campus did Jasper Barlowe say were haunted?”

Professor Viharo thought for a moment. “I believe you’re right. I’d have to check my notes to make absolutely sure.”

“How many ghosts did you see at Shackleburg?”

“But maybe you did! You wouldn’t know if you saw one, because ghosts aren’t real, and neither are you.”

“But not within the context of our story. That would be a truly foolish ending. Oh, it was all a dream. Oh, everyone was dead all along. Oh, it was all a panicked moment before the rope snaps around a man’s neck at the gallows. That works for ghost stories, but it permits too many opportunities for lost catharsis. Do not trust a story that resurrects the dead at its conclusion. The dead—”

“In a sense,” Professor Viharo sighed. “They do haunt us. That is true. Professor Lorna Rodan was haunted by her actions and her abusers. Do you want to know how she killed Professors Soames and Tatum? Dirk and Gustave?”

“Yes. She didn’t have the chance to tell me!”

“That is unfortunate. What is more unfortunate is that I do not know how she killed them. Maybe she pushed them down an elevator shaft? I like to imagine she somehow tricked them individually into believing the other one was in love with her, and together, they were crafting their own separate murder plot. That would have taken a lot of planning to be done in a compelling fashion. And, as you know, we—”

“I truly did not expect Loran Rodan to enjoy quite so much exposition. Did you? But it was important in establishing how Shackleburg came to be. What the school’s true intent was. But I always believed there was something sinister behind us Five Old Men. You cannot trust the established order to exert total benevolence. Young man, never trust authority to act on your behalf. They may be your elders, but they remain individuals of their own, with their own desires—often perverted and informed by years of plagued thinking and poisoned perspective.”

“Wait,” I thought for a second. “What became of Madam Vestoff? The woman who rescued me from the railway platform before I arrived?”

“Isn’t it obvious?” Professor Viharo laughed dryly and spoke directly to me. “She was Lorna’s friend Alexis from the telegraph office in St. Louis. She collaborated with Lorna to kill Dirk and Gustave. In so doing, she became an indentured servant to Professor Loomis, bound to the university, lest he reveal her place in the murder. So both Madam Vestoff and Lorna were positive forces of authority within the system while Professor Loomis remained a distant adversary. I expect Jordan would learn to trust her mentor once again, in time. Meanwhile, I would not have been surprised if Jasper was led astray by Professor Rakosi.”

“Yes, certainly Professor Rakosi would have assembled false relationships with a certain sect of students, likely led by Jasper, and attracted them back under the thrall of the New Chapel. Hence, the eventual clash for the fate of the campus and the school’s role in the battles against the threat from above.”

“Jasper?” I gasped. “My best friend would have betrayed us?”

“Most certainly. It’s all standard Shonen-manga. You need a rival, Keziah. Jasper will grow up to be the patriarch of a bloodline that will plague America for more than a hundred years. And the soul of Shackleburg will remain conflicted well into the twenty-first century.”

“You mentioned the threat from above. The sea. Professor Loomis mentioned it in his series of telegraphs we found in the archive.”

“That was rushed,” Professor Viharo admitted. He patted his thigh and stroked his beard. “You should have come across them in bits and pieces. Perhaps scattered across campus, or held by adversaries that required you to make peace with? You never even found your way to the maze gardens or the cavern.”

“I’d hardly count the visit to the archive. I never went inside the Ontology building, and that was meant to be my area of study.”

“That is funny, isn’t it? But in delaying the school’s ability to function as a school, we might have earned the opportunity to see the brilliance of bright, motivated individuals all contributing to a massive crisis. First, you met these people simply as people, away from their expertise, and you found them often difficult to understand, or work with. But, you might find your prejudice was misplaced. Like Ianto.”

“I was ready to forgive Ianto. Almost immediately,” I said.

“And that was your greatest characteristic. You wanted to see the best in your peers. And you wanted to understand their perspective. It would have attracted many students to your cause. And it would have made your falling out with Jasper all the more tragic.”

I nodded. “Is that my only—characteristic?”

“Perhaps,” Professor Viharo sighed once more. “But then again, Hamlet was motivated by revenge and an oedipus complex, which are trite and revolting characteristics, respectively. Ishmael was hardly more than a narrator that wanted to ride on a whaling ship, and MOBY-DICK is the story of the culture and madness he observed on that journey. Sarah Connor just didn’t want to be killed by a Terminator. What matters is whether the character, even if superficially-simple, is pleasant and worthy of our empathy. Were they trying hard to get where they wanted to go? Were you trying hard, Keziah?”

“It’s a story borrowed heavily from the works of Harlan Ellison, but that’s not important right now. Goddamn, I am tip-toeing along the metatextual line. Did you know there was a chance I, too, would’ve been a woman?”

“There were always going to be Five Old Men, but the irony would’ve been that only two of the Five Old Men were actually men. Ely Hopewell was my potential name. That’s as far as things got. Most of us began simply as names. We were not linked to professions, or personalities, or any preconceived intentions. Just a list of names and locations on campus. The rest was invented on the day. On the day, Keziah! The people you met, the places you went, the struggles and interpersonal conflicts, all was made up in the moment. As a joke. As a test. As an exercise. And we’re out of space and we’re out of time.”

“Now you’ve been invented. Now you exist. And you’ll evolve. And change. And someday, we all might come back. I don’t know. We really shouldn’t do this in November, the conflict with the Thanksgiving week is a total pain.”

“Not where I am. Wow, I thought we were going to end up with a Neon Genesis Evangelion ending, but then it really turned into a Stephen King ending, didn’t it? That’s what you get when you stuff two hundred thousand words worth of ideas onto forty-five thousand. See you at the editing desk.”

Next up: Candlestick | Entry 1