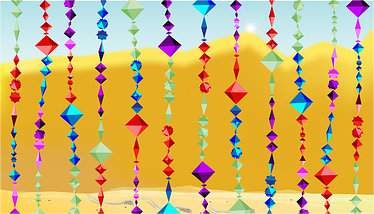 "[The Alchemist presents] Something even better than value."

For a while, we were wondering what all the fuss was about with The Alchemist. We read it years ago, so the fact that these details come straight from memory are a testament to how sticky these concepts are for us. It's not that long of a book and it's written. . . poorly isn't the right word. "Simply," is the right word. It is "simply" written. It's a vivid vehicle for a concept, not a style.

We don't mean that we went into it to see what all the fuss was about -- we mean we went into it looking for answers. About what precisely, we weren't sure. Our familiarity with alchemy is limited to Fullmetal Alchemist, a fantastic TV show. It's only 52 episodes, detailing the concepts of loss, value, exchange, and circularity, featuring the travels of two brothers across a weird, oddly-interpreted version of early-1930's Europe. Short version, the brothers' mother dies, their father is estranged, the brothers attempt to revive her with alchemy, a practice identified as science, but contains more than two-scoops of juicy mysticism too. The boys wrongly assume their mother's dead human body can be resurrected by transfusing the elemental components of a person -- hydrogen, oxygen, carbon, literal elements and such -- thus remaking her. "Transfusion" is the valuable word in the previous sentence.

Transfusion, in the alchemic sense, is taking something and turning it into something else of equal value. This time, "value" is the valuable word in the previous sentence. When you have something of value, what gives it that value? There are only two answers: "you" and "not-you."

See, what The Alchemist does is explain value, and it does so with grace and quickness. You are permitted to place value upon certain things, but not all things. That's just life. That's the way the world works. The boy in the book -- who we don't believe is ever really properly named, and fucking whatever if he is, it's not like people make puns about it that are pivotal to the plot -- has a herd of sheep at the start of the story. They have a tangible worth. He could sell them to buy a new book to read. He could use the book as a pillow while he travels. He could keep traveling happily if he's rested. He understands the value of the things he posses. He values his life, yet he hasn't learned to value his existence.

His soul is short-sighted. A short-sighted soul is not as valuable to the world. The world wants every soul to be valuable, to be enriched and full of experience, which is part of the Gaia Theory we touched on during the Princess Mononoke review. As souls travel through the world, without realizing it, they are contributing to the growing strength of other souls. A moment very late in the book emphasizes this point, that we don't realize how far our actions reach. They don't just touch immediate lives, no, these actions can sometimes lie dormant for generations. A character remarks that there was once a man whose ancient poetry was lost for centuries, considered inferior to his brother's poetry at the time of its writing. Centuries later, that lost poetry was found, revered, and caused a revolution of goodness. This is an example of human energy's reach and how it can extend across the epochs. The universe wants human souls to grow strong and to win. A soul striding towards its destiny casts resonance onto others, which manifests in the form of "beginner's luck" -- that luck brings confidence and the confidence brings inspiration. That's how it works. That dose of beginner's luck will in turn propel that lucky soul in the direction of its own destiny, the correct direction marked by the appearance of omens. Understanding this Algorithm Of Spirits (we just made that up) is how a person grows.

At first, the boy's understanding of the world is confined to his current contentment, his sheep, the books he loves and trades, and a girl he spoke to once with raven-black hair. Again, names are never really important. The boy is approaching her village and hopes to see her. When he is in the village, he is approached by a king disguised as a beggar. The king explains that the boy should go to the Pyramids and find the treasure buried there. Uh, okay. The boy is in Spain, the Pyramids are in Egypt. Fun fact, the boy doesn't understand just how far Egypt is. Roadtrip?

Now the boy has to extend himself or wallow in complacency. That's a heavy moral for just a kid with a flock of sheep and a crush on a local girl. Unsurprisingly, he doesn't handle the advice very well (or does he?).

What he grows to learn is that he can always go back. He will always know how to be a shepherd, so even when he is mugged and left on the wrong side of the Gibraltar a few pages later, he learns to handle his shit. He gets a job polishing glass ornaments for a man that doesn't like his own life all that much. What follows is the most thrilling vignette about polishing glass ornaments ever put to paper. The boy realizes he isn't going anywhere soon and his job is decent enough that he's at least sort of happy. While doing this, saving money, talking with the glass seller, he really gets to thinking. He thinks slowly about where he is, what he's learning, and focusing on the more immediate things in life. Weeks and months go by. His enthusiasm to speed up his return to his sheep makes him think outside the box, coming up with ideas on how to sell the glass ornaments better -- serving tea in them, selling them outdoors, drawing in patrons. This has the intended effect.

He realizes that even though he can always go back to his sheep, he suddenly has a new skill he can always go back to in glass selling. What else might he learn if he takes another step? Who knew he could make so much good out of a seemingly bad situation. Take another step, boy. And what has he truly lost in spending time learning this skill? Time? Time that would've been spent on indifferent contentment herding sheep. Which experience would you prefer? If this time working with the glass seller had yielded no good returns, he could always go back to the sheep. But that isn't the case! No, this is getting exciting.

Into the desert. Travel with the caravan. Onward to the Oasis. To Fatima.

Fatima is love at first sight. Literally sight, not words. There is no getting to know you, no "meet-cute." The boy goes in for the kill because he knows all kinds of unusual weirdness and strange circumstances have brought him to this continent with these experiences with this band of men at this time in this state of mind and Beautiful Fatima was there right then. He tells her he loves her. Jesus, dude. What if she said no, or if she had a boyfriend?

Well, logically, he can always go back to the raven-haired girl in Spain. But he's so fucking full of confidence, the boy is a human buzzsaw. #Winning. He just starts knowing shit is true. He's listening to the Soul of the World. He's able to resist fear with training, and if nothing else, isn't that a great lesson to be learned? He trusts instinct and he acts on it -- not lying to yourself, not being divided internally, we tell you, is an intense, liberating feeling. Things really start to get interesting.

He meets the Alchemist and tells Fatima he has to keep looking for the treasure at the pyramids. Amazed, yet understanding of a man's need to grow, she tells him to go, knowing he'll come back because. . . because. . . he's the man at this point. In the best way possible, he's the man. He's tested, yes, he's betrayed, threatened with death, but always, he's just in the moment. Yeah, he might die, but he's going to die with his boots on and with love in his heart. At least he didn't die in a cubicle.

The question: is he diluted? Normally, we'd say yes. But the kid has got massive onions to come this far. He's fearless in a noble pursuit, which downplays the possibility of delusion.

Not an actual quote: "Baby, I love you. I have to leave for a while though. This orphanage / righteous rebellion / ancient treasure ain't gonna save itself. I'll come back as soon as I can." That's the truth. And holy shit does the truth hit with crunchy impact.

He's the hero you normally wouldn't believe in because he becomes such a White Knight. It's the fact that we were given the "before and after" shots that we realize how he was made into the zen-ified, monogamous, desert badass. He's the guy we hear about at high school reunions that make us scratch our heads and go "whoa, he refused how many awards?" And that's the point -- that's the resonance! It twinges our can-do attitude for just a second, nipping us just a bit to maybe risk something, to step out of line, to pursue what we consider -- and feel deeply -- to be destiny. What's better than deciding our fates, knowing our fates, seeing that it's good, and then growing as people further than we ever thought possible, finally taking what it was we wanted so badly. And what happens if that wasn't destiny? Well, ideally, you've grown, changed, gotten better. If not, you can always go back to your sheep, man. That's something better than somebody else slapping a value on what you've done. It's something even better than value. Because you made it that way through an assemblage of intangible experiences known only to you, ones that make you who you are in this moment, and in the unknown moments to follow.

Next up: The Airport Is Your God Now