Some people accused The Dark Knight of being a pro-police-state movie back when it came out in 2008. Batman was (is) an insanely rich, emotionally-motivated man with the means to alter the lives of many people without their democratic say. Yes, he saves the day and means well, but he used a form of hyper-surveillance to achieve the kind of security required to stop a modern terrorist like the Joker. Comparisons to the Bush administration's then-relevant and now-outdated War on Terror were made, suggesting that Batman was an analogy for our previous president. He was driven, perhaps misguided, in his quest for security, contrasting scarily against the Joker's chaos, a force of destruction, rather than one of "freedom." However, Batman was repentant, and refused to rise to the level the Joker assumed would be required.

Because society refused to tear itself apart in fear.

With The Dark Knight Rises, eight years later in Gotham-time, the Joker might have gotten his way after all. Look at the banner poster again. The new villain, Bane, has the people on his side, nearly all of the people -- look at the crowd. Batman has two or three cops on his side, representative of order. But not of "the people." The most recent footage and Nolan's comments are suggesting this is a movie about revolution, placing Batman on the opposite side of the citizenry he originally meant to protect. He's old money and the Gotham's people have sided with what we can assume are Bane's psychotic promises for retrobution after years of urban decay, echoing a 1930's Germany, perhaps. So begins his weaponization of this city's version of the Occupy Wall Street movement. That's where his army comes from. They're just people. And they're siding with the villain.

Here's where things will become frustrating for movie-goers. Hollywood is a distinctly left-leaning culture. Movies idolize the misunderstood, counter-culture outsider that means well -- a freedom fighter that loves the people. In this case though, Bane, the painkiller-addicted villain, has the love of the people. Batman is siding with the cops against the poor and defenseless that have grown to resent him for supposedly killing the martyred Harvey Dent at the end of the last movie. 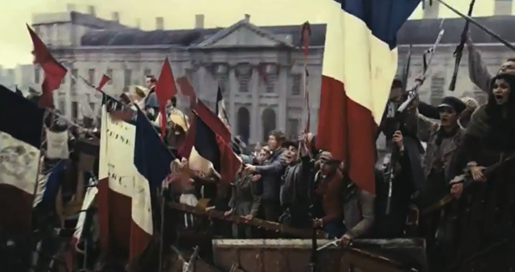 Who is the audience going to identify with? The hero? Or the citizenry? Nolan was so bold as to equate what happens in this movie to the French revolution, and he's not far off -- if you want a visual comparison, watch the recent trailer for the new Les Misérables movie and their hyper-French barricades. Except this time, Bane is Jean Valjean and Batman is Javert.

How will Batman save the day when the masses assume that they are already in the process of being saved by somebody more charismatic and more identifiable in Bane -- somebody that didn't kill a DA. Somebody that isn't a trust-fund baby. Even if the people in Gotham don't know Bruce Wayne is Batman, it's still obvious he has the cash to fly his own bat-themed VTOL, which is epitome of Kanye-esque 1%-ishness. Audiences aren't going to be able to handle that kind of paradigm shift with the people being on Bane's side unless Nolan does a very good job of making it clear that Batman does indeed remain the good guy and is trying to make Gotham's citizens see that they have sided with the wrong person in Bane. Or maybe not? Maybe Gotham will implode with Nolan's nihilism, finalizing the statement that superheroes create more trouble than they prevent.

Either way, is it a little weird that they feature Anne Hathaway as Fantine so much in the first trailer for Les Miz. That girl is gonna die. Early. In the story.

I wouldn't put it past Nolan to end the movie with total cruelty and have the movie's surviving characters write-off Batman's superhero "experiement" as just that -- a failure and a legend that they look back upon in their history as a something worth talking about, but not worth worshipping.

For more cool, focused stories, Ghost Little's free book samples are available for download. DRM-free and compatiable with Kindle or your e-reader app of choice!

Previously: How To Make Iced Coffee, Cold-Brewed Cowboy-Style At Home