Which Types Of Websites Have The Worst Pop-Up Ads?

It didn't take long for the internet to turn into 1970s Times Square's digital equivalent. Everything is sea-weeded in salty, leeching, tasteless garbage masquerading as business or advertising. You feel like you could be mugged at any moment.

There are a few chief offenders in this race to bottom of horrible online user experirence. Ads slide out, pop out, pop up, mislabel, mislead, and trash your brain while you try to find what you'd imagine is the simplest information. The assault is so brutal, it ought to be brought on charges for thought-pollution.

Never mind why these sites launch the bombardment. That should be obvious. Which sites are the worst is the truly notable point:

1) Recipe sites have the worst layouts on the internet. 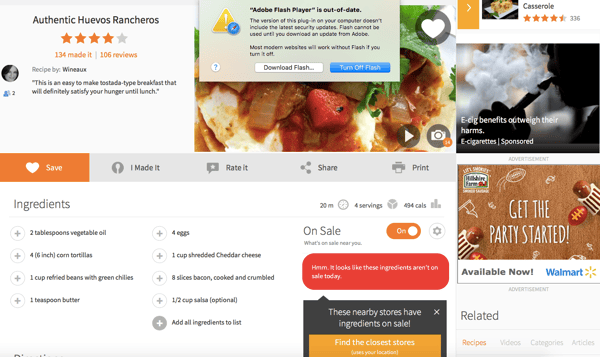 Picture yourself in the mood for cooking. You're a modern individual. You don't own a cookbook, outside of maybe a few index cards your mom tucked into a box for you when you moved across the country. What's more, you have fine enough taste and have watched enough programs on the Food Network to feel motivated to search for a recipe for, say, huevos rancheros.

If you seek such a recipe, you'll be faced with exactly what you see above in the screengrab. It looks like a parking lot ate a San Franciscan transplant and barfed it back up.

Yup, that looks just like grandma's cookbook. Ads for vaping, Walmart, and, oh, your Flash plugin is busted. Thanks, Safari.

What are these other buttons? What's that toggle? Stores nearby? How does the site know where you are? Did you sign in? Why is it also recommending you make a casserole?

2) Wait, no, song lyric sites have the pop-up ads. 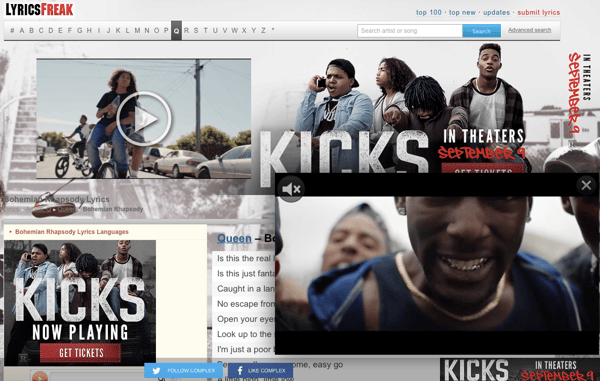 The impetus for this list. It's worth pointing out that Google has taken huge strides to populate song lyrics at the top of its searches, evidenced by the .gif at the top of this piece.

Consider that. Google, a company that catalogs everything and fostered the modern open-internet (in a sense), was so irked by the layouts and pop-ups on song-lyric sites that they're trying to get out in front of them.

This is a screengrab of the lyrics page for a search for Bohemian Rhapsody. It's possible Kicks could be a sweet movie? In any case, this isn't what was searched for. This entire page is 85% an intrusive ad for an irrelevant movie.

Dynamite the internet and put it back together. It's the only way to be sure.

3) Hang on, movie showtime sites have the worst ads. 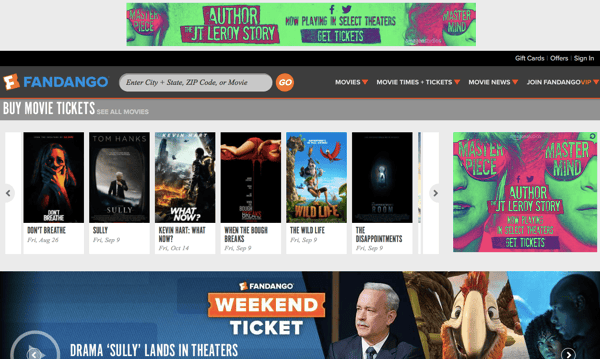 As bad as it is for filmmakers, it's even worse for theater chains. It's a sewage fart of advertisements, ultra-expensive corn-food, and sad kids paid to clean up barf with (or without) sawdust.

Imagine that experience transferred onto the internet. Somehow, getting movie tickets online is near-identical experience to going to the movies. That's a crime.

The screengrab is from Fandango, perhaps the most popular ticket-buying site. Navigating it is about as comfortable as trying to sleep on a bench at a bus station.

While nobody is saying tasteless web design is more to blame than Zack Snyder for the movie-going experience dying, it's a close second.

This is a "yes" or "no" question. Is Twitter down? Is the PlayStation Network down?

Are other people seeing this? Is the provider aware? Have they started moving to fix the issue.

Nobody knows! But, hey, have you heard about how this pastor got rich off a secret Bible Money Code?

Look at the data on this page. Can you understand what's going on? This is the first five results for "Is PSN down?" on Google. Sony's own Trust page doesn't show up until a decent length down the search page.

Not your proudest moment, but you've gotta lock down that keyword, Sony.

The internet is blows.

Next up: Our Golden Age of Television Makes us Rely on Friends' Recommendations